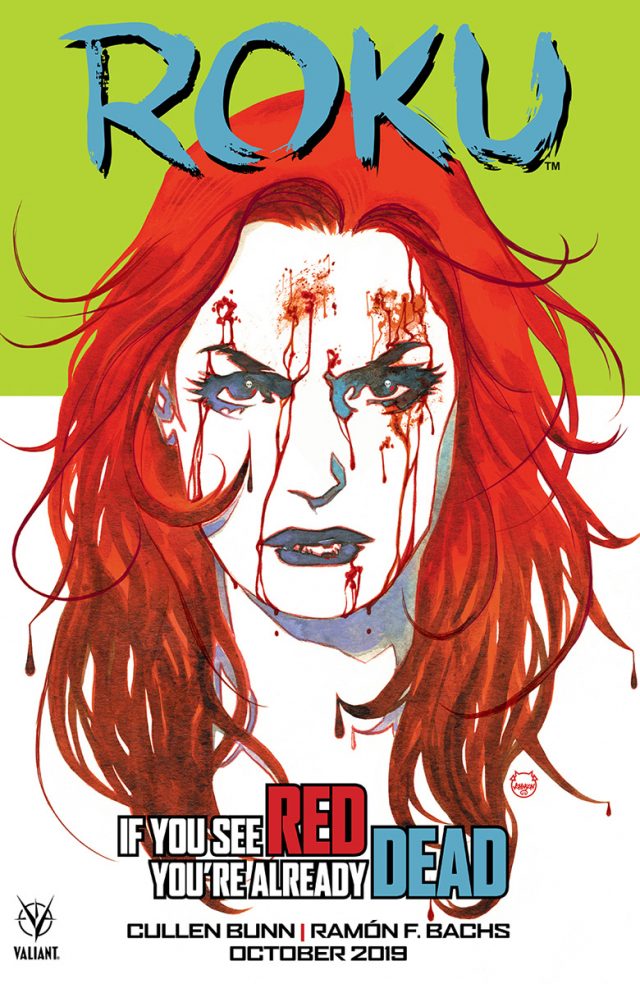 “I wanted this story to show off a dark underbelly of the Valiant Universe, a corner of the world populated by powerful criminal organizations. My hope is that these criminal outfits start plaguing other Valiant characters. Really, I’m just here to cause trouble.”
Cullen

“Roku has such a terrific hairstyle I can’t wait to draw! Cullen’s a great writer and a wonderful person. I am very lucky to be working with him again!” “
Ramón

“The ultimate weapon, without compromise, without compassion and without a care. Roku answers to only one higher calling: herself. So what’s there not to love about her?”
Editor Lysa Hawkins

About Cullen Bunn
Cullen Bunn is a full-time writer who has written comics for Marvel Entertainment, DC Comics, Oni Press, and Boom! Studios. He also writes short fiction and novels, including the middle reader horror novel, Crooked Hills. He has worked various odd jobs, including Alien Autopsy Specialist, Rodeo Clown, Professional Wrestler Manager, and Sasquatch Wrangler. Cullen grew up in rural North Carolina but now lives in the St. Louis area with his wife and son. And, yes, he’s fought for his life against mountain lions and performed on stage as the World’s Youngest Hypnotist.

About Ramón F. Bachs
After studying at the Joso School for Comic-Book Artists, Ramón started publishing in Spain books like Manticore, Yinn, or Castor & Pollux. A few years later, he did his first American work for Dark Horse Comics (Joker Vs. Mask, Star Wars, Shrek). After some issues of Gen-13 for Wildstorm, he drew the acclaimed Detective Comics run Batman: City of Crime with David Lapham for DC Comics. Then he moved over to Marvel, and worked with Paul Jenkins in books like Generation-M, Civil War: Frontline, WWHulk: Frontline, and Marvel Apes. Back at DC he worked World’s Finest miniseries, Red Robin, Azrael, the Two Face co-feature in Batman: Streets of Gotham, Batgirl, and Bruce Wayne: The Road Home – Red Robin. He’s also worked in the all-ages books Marvel Universe Ultimate Spider-Man, and Avengers: Earth’s Mightiest Heroes, plus Figment Legacy, Civil War II: The Accused, Robin: Son of Batman, Hearthstone for Blizzard, and many others. After working on Accell for Lion Forge, Ramon has worked for Marvel on the Marvel Rising: Squirrel Girl / Ms Marvel miniseries and Star Wars: Age of Rebellion – Darth Vader.
​

About Valiant Entertainment
Valiant Entertainment, a subsidiary of DMG Entertainment, founded by Dan Mintz, is a leading character-based entertainment company that owns and controls the third most extensive library of superheroes behind Marvel and DC. With more than 80 million issues sold and a library of over 2,000 characters, including X-O Manowar, Bloodshot, Harbinger, Shadowman, Archer & Armstrong, and many more, Valiant is one of the most successful publishers in the history of the comic book medium. For more information, visit Valiant on Facebook, Twitter,Instagram, and ValiantEntertainment.com. For Valiant merchandise and more, visit ValiantStore.com.