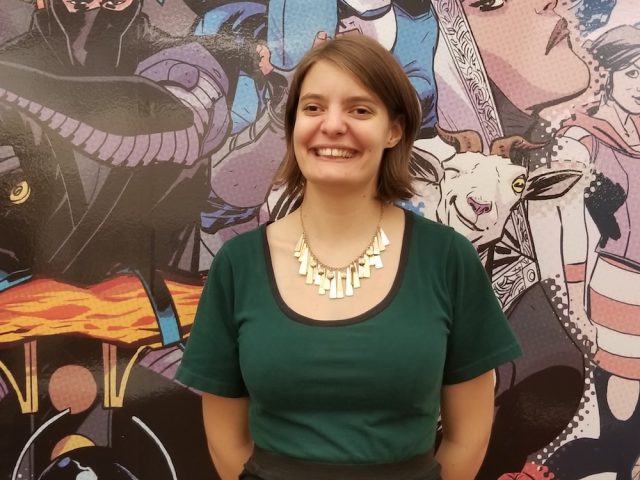 Valiant is excited to announce that it has promoted Julia Walchuk to the position of Sales and Live Events Manager. In her new role, Walchuk will be responsible for planning and orchestrating Valiant’s extensive convention schedule, including planning con exclusives, working with consignment partners, and designing and managing Valiant’s physical presence at events, all in addition to helping maintain important relationships with comic book shops around the country.

“Julia is revolutionizing the way Valiant presents itself to our fans and retailer partners through live events,” said Director of Sales Matthew Klein. “Her ambition, insight, innovation, and work ethic inspire me every day. She’s become a cornerstone of Valiant. Julia is a superstar and the whole industry is getting to see it now.”

Walchuk has long been a passionate member of the comic industry. Prior to joining Valiant as a freelance Sales Manager in the summer of 2017, she worked as a retail professional at several comic book and gaming stores, including Dreamers Vault in Minneapolis. She also represented British comic publisher 2000 A.D. as a volunteer Booth Associate for three years at New York Comic Con and San Diego Comic-Con. She has a degree in Communication Studies from the University of Minnesota.

“Conventions are an amazing way to connect with fans, retailers, and creators alike and it’s a joy to be able to bring all of that together for a successful show,” said Walchuk. “Valiant has always been a publisher that made me feel welcome, from the time that I first went to a convention as a fan, to when I was a retailer working closely with the Valiant Sales team. It’s an honor to carry on that tradition!”

Valiant recently unveiled an outreach initiative known as #VALIANTVISITS, bringing the publisher’s hard-working and devoted Sales team into the global spotlight by publicly highlighting their many visits to local comic book store locations across the country and around the world. The company is scheduled to make its next convention appearance at North Carolina Comicon at the Durham Convention Center from Friday, November 9th to Sunday, November 11th.