Get over 150 issues of Valiant comics while helping to support The Keep A Breast Foundation! 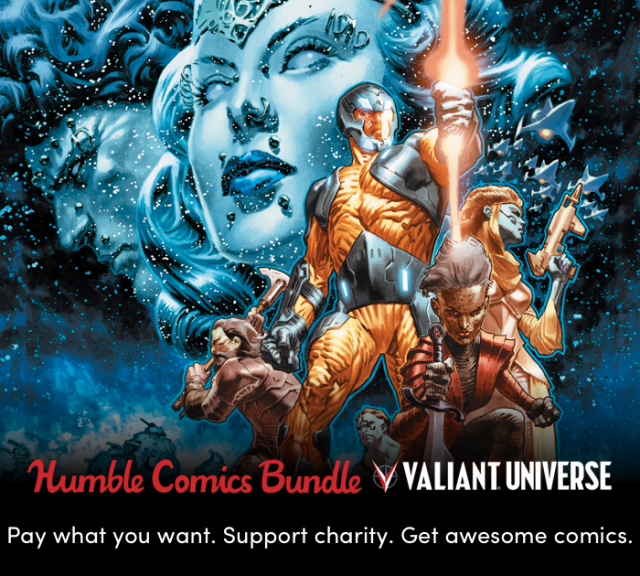 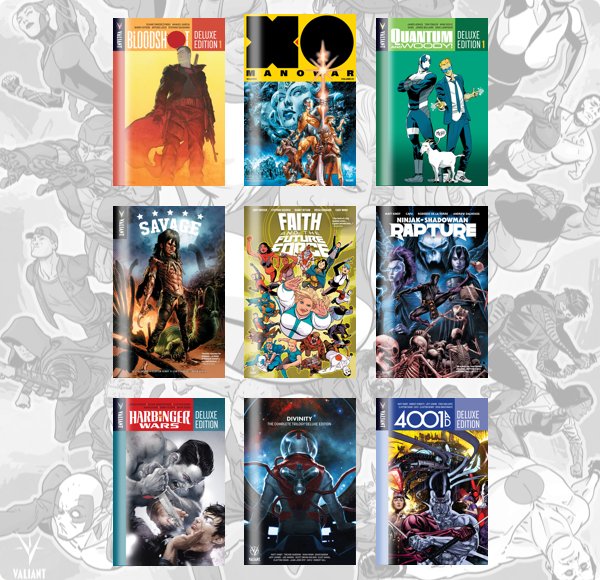 Customers can pay $1 or more to gain access to DRM-free digital files of a set of first issues for hit new Valiant series NINJA-K, SHADOWMAN (2018), and QUANTUM AND WOODY (2017), as well as introductory volume 1 trades like X-O MANOWAR, BLOODSHOT SALVATION, BRITANNIA, and more – plus a discount code for 15% off all purchases at the Valiant Store!

At the $8 or more tier, unlock a new tier of books that includes volume one trades of FAITH AND THE FUTURE FORCE, HARBINGER RENEGADE, GENERATION ZERO, and the HARBINGER WARS DELUXE EDITION and SECRET WEAPONS DELUXE EDITION, as well as a discount code for 20% off all purchases at the Valiant Store!!

And for $15 or more, fans can unlock a massive premium tier of Valiant titles, including deluxe editions of BLOODSHOT, X-O MANOWAR, NINJAK, DIVINITY, and other content-stuffed special offerings – and a bonus discount code for 25% off all purchases at the Valiant Store!! Curious fans should check out humblebundle.com for the full lineup of available titles.

A portion of the proceeds will go to support The Keep A Breast Foundation, whose mission is to create awareness for breast health and education with young people all over the world.

“We are proud to partner with Humble Bundle once again to benefit a great charity, this time The Keep A Breast Foundation,” said Publisher Fred Pierce. “Backers who support the campaign can gain access to over 20 highly-in-demand Valiant titles, including deluxe editions that contain a wealth of extra material. With the Bloodshot movie currently filming, now is a good time to catch up on all the Valiant titles you may have missed – and for a price you name!”

The fundraising campaign will run for two weeks, ending at 11:00 a.m. Pacific on August 22nd, so head to humblebundle.com now for some great comics!

Humble Bundle sells games, ebooks, software, and other digital content through pay-what-you-want bundle promotions, the Humble Store, and the Humble Monthly curated subscription service. When buying a bundle, customers not only choose how much to pay, but also how their payment is divided between the content creators, charity, and Humble Bundle. Purchases from the Humble Store and subscriptions to Humble Monthly also help support charity. In 2017, Humble Bundle announced the launch of a multi-platform funding and creative initiative to publish games “Presented by Humble Bundle.” Since the company’s launch in 2010, Humble Bundle and its community have raised more than $129 million for a wide range of charities across the world. To see more, visit https://www.humblebundle.com.

The Keep A Breast Foundation™ is a nonprofit organization with a mission to empower young people around the world with breast health education and support. Since its inception in 2000, KAB has worked with young people to remove the shame associated with breasts and breast health. Through various initiatives and programs such as breast cast art exhibitions, “Non Toxic Revolution”, “Check Yourself! App” and “i love boobies!” campaign, KAB has opened up the dialog about breast cancer, and has proven to be a doorway to breast self-awareness and education.

Keep A Breast has grown into the leading global youth-based breast cancer prevention organization, with global affiliates in Japan, Europe, and Mexico. Constantly pushing the boundaries of the pink ribbon status quo, Keep A Breast has always encouraged young people to love their boobies, get to know their bodies, and be aware of changes.