Now, the long-brewing battle between Valiant’s greatest icons will finally reach the stratosphere – literally – and, out of the ashes, a new order for the Valiant Universe will be hewn as New York Times best-selling writer Matt Kindt (X-O MANOWAR, DIVINITY, Mind MGMT) and comics juggernaut Tomás Giorello (X-O MANOWAR) present the MUST-READ comics showdown of 2018…and no one gets out unscathed!

The NINJA-K #10-14 PRE-ORDER EDITION BUNDLE – five 40-page, massively expanded editions of NINJA-K’s next thrilling story arc, “FALLOUT” – can only be ordered as a set and must be reserved with your local comic shop by the final order cut-off date of July 23rd, 2018! Released monthly from August 2018 through December 2018, each PRE-ORDER EDITION comes packed with trade paperback-style extras and bonus content, including creator commentary, behind-the-scenes looks at the creation of the comics, process character designs and artwork, and first looks at upcoming issues – plus exclusive covers by Philip Tan (Uncanny X-Men) that can’t be found anywhere else!

BRITANNIA: LOST EAGLES OF ROME #2 (of 4)
Written by PETER MILLIGAN
Art by ROBERT GILL
Cover A by CARY NORD
Cover B by SIJA HONG
Variant Cover by KANO

Sentenced to die for crimes against the empire, Aric of Dacia and his new comrade, Sabbas, have escaped the gladiatorial arena…only to find themselves in far more dire straits! Centuries before he would become X-O Manowar, can a brasher, younger Aric – sworn to combat the Romans at any cost – outwit and outmaneuver the machinations of the planet’s most powerful civilization…even as death threatens him and the fate of the entire Visigoth nation?

Bloodshot has traveled from the depths of the Deadside to the far-flung future of 4002 A.D. to save his daughter’s life…and spare her the murderous inheritance of the nanites that flow through both their veins. Now, stranded at the crossroads of the 41st century with one last mission between them and freedom, the question will finally be answered: Was it all for naught? At long last, Eisner Award nominee Jeff Lemire’s staggering Bloodshot saga reaches a monumental climax as superstar artist Doug Braithwaite (X-O MANOWAR) helps close “THE BOOK OF REVELATIONS” once and for all! 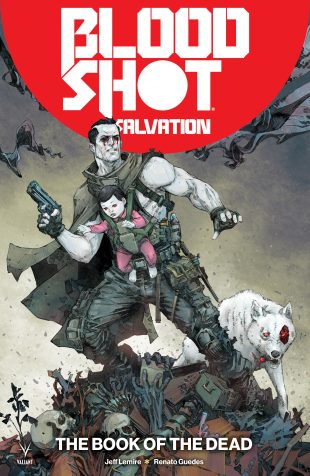 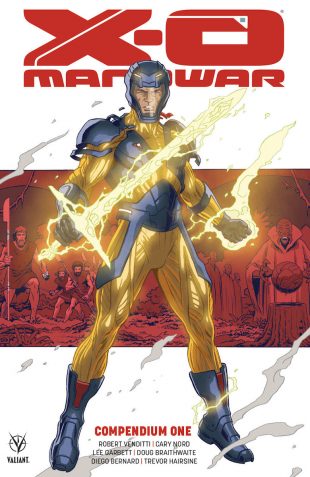 Introducing the first compendium collection of the chart-topping, award-winning series that relaunched the Valiant Universe! Go back to where the war began with this first, massive 800+ page volume in a value-priced paperback series collecting the complete adventures of Valiant’s armored Visigoth, starting with the best-selling 2012 debut that the A.V. Club calls “stunning!”