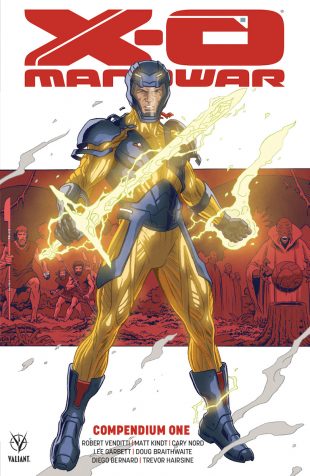 Valiant is proud to announce X-O MANOWAR COMPENDIUM ONE – a MASSIVE, 800+ PAGE COLLECTION of the chart-topping, award-winning series that relaunched the Valiant Universe, released for the very first time in a value-priced softcover format!

On August 22nd, go back to where the war began with this first, gigantic volume in a value-priced paperback series that collects the complete adventures of Valiant’s armored Visigoth, starting with the first two years of Aric of Dacia’s journey from barbarian prince to superpowered protector in X-O MANOWAR (2012) #1–29, UNITY (2013) #1–4, and ARMOR HUNTERS #1–4!

As Aric of Dacia makes his long-awaited voyage back to Earth within the pages of Matt Kindt’s best-selling 2017 series, discover why the first two years of X-O Manowar’s unrelenting return to comic store shelves everywhere has been hailed by fans and critics alike as a vibrant and vital introduction to the Valiant Universe:

“A stunning debut… [and] a great start for a hero: sacrifice, discovery, vengeance.” – The A.V. Club

“Filled with action on a massive and personal scale.” – Comic Book Resources

“One of the industry’s top superhero books.” – Complex Magazine

Following in the proud footsteps of the HARBINGER WARS COMPENDIUM and featuring the first appearances of Ninjak, Colonel Capshaw, the Vine, GIN-GR, and dozens more iconic Valiant characters, X-O MANOWAR COMPENDIUM ONE is a breathtaking entry point into one of the most celebrated superhero universes in comics, from one of the best-reviewed publishers today! On August 22nd, get the powerful opening salvos of X-O MANOWAR (2012), UNITY, and ARMOR HUNTERS in one oversized collection!

But first: the blockbuster creative team behind Valiant’s visionary sci-fi epic DIVINITY take the helm for an ALL-NEW ARC and FEROCIOUS NEW JUMPING-ON POINT in X-O MANOWAR (2017) #15! On May 23rd, master storytellers Matt Kindt (HARBINGER WARS 2) and Trevor Hairsine (ETERNITY) reunite to reveal a battle-scarred mission from Aric of Dacia’s youth… prepare to witness the landmark episode that forged the heir to the Visigoth nation into the world-smashing, interstellar champion now known as X-O Manowar!