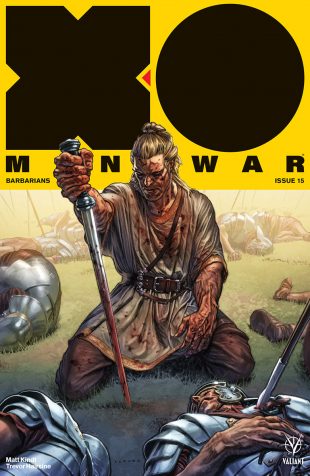 As first revealed at Comicon.com, Valiant is proud to present your first look inside X-O MANOWAR (2017) #15 – the FIRST ISSUE of “BARBARIANS,” an ALL-NEW ARC and FEROCIOUS NEW JUMPING-ON POINT from New York Times best-selling writer Matt Kindt (HARBINGER WARS 2, Mind MGMT) and blockbuster artist Trevor Hairsine (DIVINITY)! On May 23rd, the best-selling creative team behind Valiant’s epic, mind-bending DIVINITY series comes together once again for a bombastic new adventure set in heydey of the Visigoth Kingdom. Travel back, back into Aric of Dacia’s storied past, as he reveals the journey that molded him into the interstellar armor-wielding warrior he is today!

PLUS: Don’t miss your last chance to reserve “BARBARIANS,” the next staggering arc of Valiant’s best-selling epic series, with specially expanded, limited editions of each issue in the X-O MANOWAR #15-18 PRE-ORDER EDITION BUNDLE – available only as a pre-order set! Released monthly from May 2018 through August 2018, each PRE-ORDER EDITION comes packed with trade paperback-style extras and bonus content, including creator commentary, behind-the-scenes looks at the creation of the comics, process character designs and artwork, and first looks at upcoming issues – plus exclusive covers by Shane Davis (Superman: Earth One) that can’t be found anywhere else!