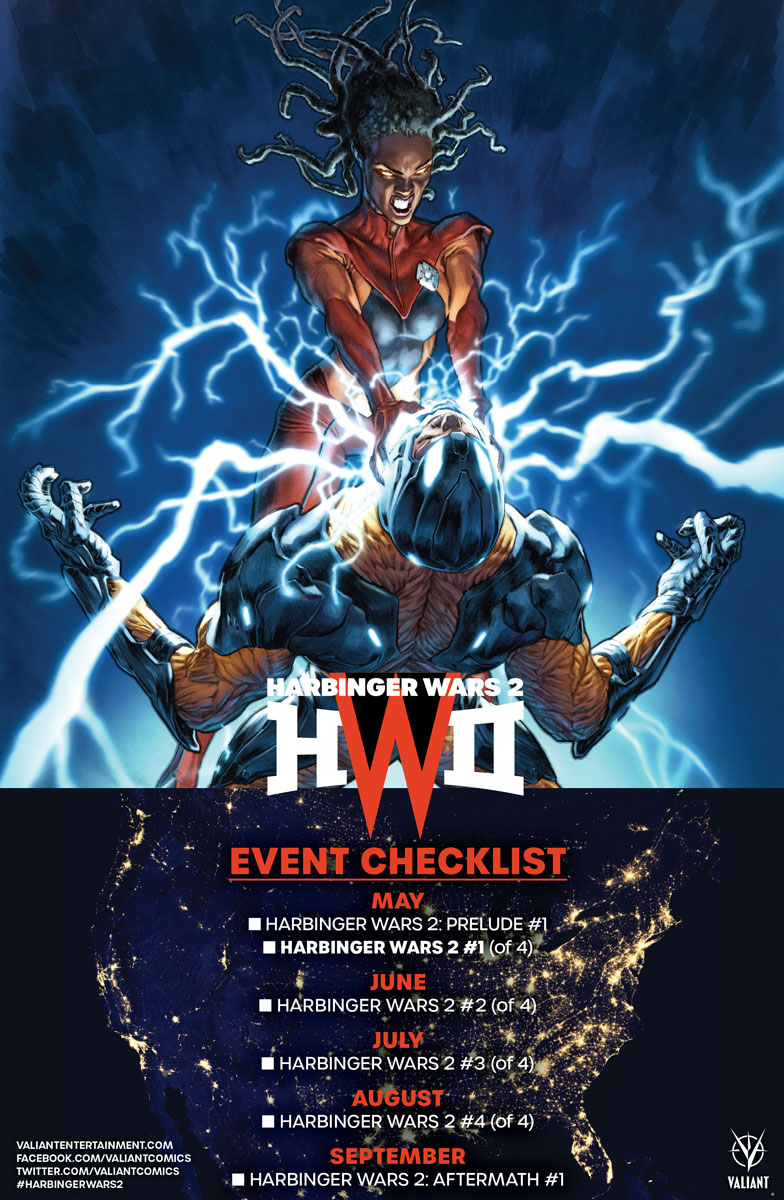 This summer, the most powerful Valiant event ever attempted erupts in full force as X-O Manowar, Livewire, the Harbinger Renegades, Bloodshot, the Secret Weapons, Ninjak, and a cast of thousands draw their battle lines in HARBINGER WARS 2 – the ultimate, action-fueled entry point into the most acclaimed superhero universe anywhere in comics today! Spanning six essential issues between May and September 2018, the complete HARBINGER WARS 2 saga will encompass the four-issue main series, as well as a self-contained, new-reader-friendly prelude introducing the main players behind the conflict, and a standalone aftermath special chronicling the scarred landscape of the post-HW2 Valiant Universe:

“What I love about these events with Valiant is they grow organically…” series writer Matt Kindt told CBR. “I don’t want to be writing some big, sprawling story with no real heart to it, and it’s just about connecting different books and characters. I think the thing that attracted us all to this idea was the heart of the story and the characters driving it, and telling a good story with heart. Eric had a great idea with Livewire, and really makes it about these character moments. The big event just happens around it.”

“It’s not as much about the event as it is about spotlighting these amazing characters, and pulling back a bit and showing how the universe is shared, and the friction that comes from the sharing of it,” he added. 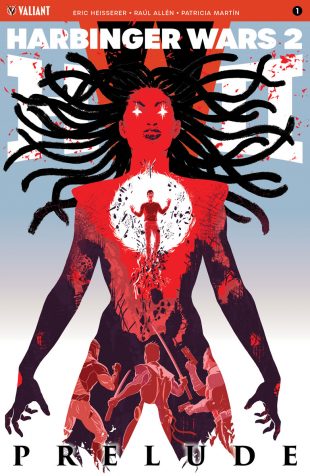 FIRST: Before HARBINGER WARS 2 begins, JUMP ON BOARD with HARBINGER WARS 2: PRELUDE #1 – a STANDALONE INTRODUCTION TO THE VALIANT UNIVERSE’s most powerful forces from all-star creators Eric Heisserer, Raúl Allén, and Patricia Martín, the master storytellers that brought you SECRET WEAPONS, on May 2nd!

On May 2nd, witness the ground zero moment for the future of the Valiant Universe with a startling, self-contained initiation into the senses-shattering clash of 2018, only in HARBINGER WARS 2: PRELUDE #1 – featuring covers by Raúl Allén (BLOODSHOT REBORN), Michael Cho (Batwoman), Cary Nord (X-O MANOWAR), and Felipe Massafera (Flashpoint: Abin Sur)!

THEN: On May 30th, X-O Manowar, Livewire, Bloodshot, the Harbinger Renegades, Faith, Ninjak, the Secret Weapons, H.A.R.D. Corps, and all of Valiant’s most enduring icons draw fire in HARBINGER WARS 2 #1 (of 4) – the FIRST ISSUE of the world-shaking comics event from creators Matt Kindt and Tomás Giorello, the superstar creative team behind the chart-topping rise of X-O MANOWAR!

This summer, Valiant’s biggest and most ambitious event yet takes hold…and, on May 30th, all of America will witness the raw, unrepentant power of the Valiant Universe unleashed in HARBINGER WARS 2 #1 (of 4) – featuring covers by J.G. Jones (Final Crisis), Mico Suayan (BLOODSHOT REBORN), Juan José Ryp (BRITANNIA), Felipe Massafera (Green Lantern/Planet of the Apes), and Lewis LaRosa (BLOODSHOT SALVATION)!