A once-loyal agent has defected from the ranks of MI-6’s most elite espionage unit…and Ninjak has been dispatched across the globe to prevent his secrets from plunging the world into chaos. But in the shadows of Mexico City, Colin King is about to discover something far more deadly… The Ninja Programme’s own former sensei, the Jonin, has assembled a conspiratorial circle of enigmatic enemies – the Dying One, Kostiy the Deathless, Linton March, and The United’s Ultimo – for a purpose so sinister that even Ninjak can’t risk engaging them alone. Enter Livewire, Punk Mambo, Dr. Mirage, and GIN-GR – Ninjak’s brand-new black ops team with a very specific set of skills…and a license to kill the unkillable!

Acclaimed writer Christos Gage (Netflix’s Daredevil) and high-octane artist Juan José Ryp (BRITANNIA) take the driver’s seat for a heart-stopping race to save the world as “THE COALITION” prepares for the ultimate clash of super-teams!

Can Bloodshot rewrite “THE BOOK OF THE DEAD” to save his daughter from the darkness?

In the realm of the dead, three travelers now seek salvation. Bloodshot – a man remade as a weapon. Bloodhound – an innocent creature imbued with formidable power. And Baby Jessie – Bloodshot’s infant daughter, newly transformed in his own terrible image. Together, these three have all been damned by fate – an injustice they now seek to undo by striking a demonic pact to save Jessie’s life. But in the underworld known as the Deadside, there are few fair deals and even fewer promises fulfilled… With his weapons laid down, can Bloodshot tip the scales of life and death to save the one precious light his existence has ever offered?

Master storyteller Jeff Lemire (Black Hammer) presents a haunting and powerful turning point in the life of Valiant’s machine-made soldier for the final chapter of the “THE BOOK OF THE DEAD” – featuring fully painted artwork by Renato Guedes (X-O MANOWAR)! 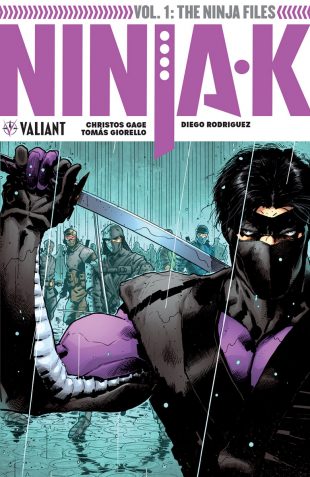 For nearly a century, MI-6, the most elite branch of Britain’s clandestine intelligence service, has honed a ruthlessly effective, top-secret division – THE NINJA PROGRAMME – into one of its nation’s most finely wielded weapons.

Tasked as the first and last line of defense for queen and country, this small shadow army of agents and assassins has produced a succession of notable assets, including NINJA-A, the Queen’s silent weapon of World War I; NINJA-E, the globe-trotting secret agent that pulled the Cold War back from the brink of Armageddon; and, most recently, NINJA-K, aka Colin King, a brash but fearless instrument of lethality that has saved the world from madmen and terror at every turn. But now…an unknown enemy is hunting and killing members of THE NINJA PROGRAMME one by one – and NINJAK is next on the list.

A new can’t-miss ongoing series from renowned writer Christos Gage (Netflix’s Daredevil) and Valiant’s latest superstar artist, Tomás Giorello (X-O MANOWAR), starts here with stunningly precise jumping-on point revealing the classified history of the black-budget spy network that trained Colin King and his predecessors…and leading Ninjak on a manhunt through a cold, calculating world of espionage and international intrigue in search of a killer targeting all ninja agents – past and present! 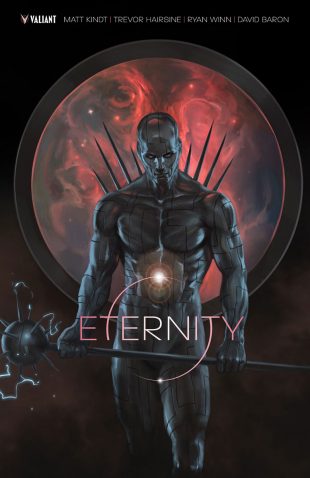 Following in the sold-out, critically acclaimed footsteps of DIVINITY, DIVINITY II, and DIVINITY III: STALINVERSE, two of Valiant’s most formidable creative minds unveil a new plane of existence beyond our own and unleash a universe of new worlds, new beings, and new myths… 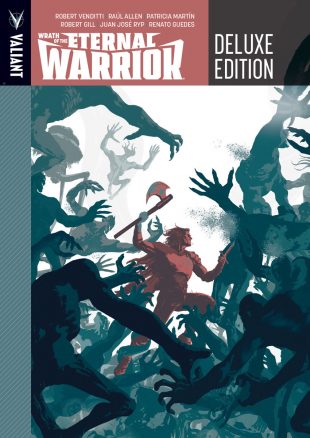 For five millennia, the Eternal Warrior has shaped history at the end of his sword. He’s razed empires, toppled civilizations, and broken armies as an immortal soldier in service to the Earth. But now, the Eternal Warrior has been torn from the world he once protected and finds himself stranded in a hostile alien landscape unlike any he’s faced before. Separated from his earthly environs, can history’s deadliest soldier survive a realm far older, far deadlier, and far more ruinous than anything he’s ever encountered? Beyond Earth lies eternity…

Collecting WRATH OF THE ETERNAL WARRIOR #1-14 and ETERNAL WARRIOR: AWAKENING #1, along with over 20 pages of rarely seen extras, including designs, process art, sketches, and more!