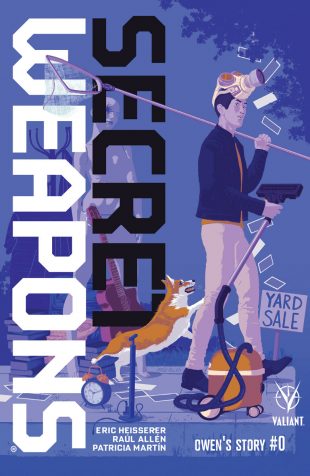 As first revealed at Multiversity Comics, Valiant is proud to announce that the world of 2017’s best-selling independent limited series is once again expanding for another essential special in SECRET WEAPONS: OWEN’S STORY #0! On March 14th, the complete SECRET WEAPONS creative team – including Academy Award nominee Eric Heisserer (Arrival) and Harvey Award-nominated artists Raúl Allén (BLOODSHOT REBORN) and Patricia Martín (WRATH OF THE ETERNAL WARRIOR) – reunite for an all-new, standalone tale spotlighting a day in the all-too complicated life of Owen Cho, one of Livewire’s new recruits and quite possibly the Secret Weapons’ most unique talent of all!

“We’re fortunate to have one of the most ambitious and hardest-working stables of creators anywhere in the industry at Valiant, and collectively, they’ve been challenging themselves to push the boundaries of the medium even farther in 2018,” said Valiant Editor-in-Chief Warren Simons. “In the first few months of the new year alone, we’ll see Eric Heisserer and Adam Pollina attempt a new style of day-by-day, panel-by-panel storytelling in SECRET WEAPONS #0; a ‘black issue’ told in total darkness by Jeff Lemire in BLOODSHOT SALVATION #7; and, now, another innovative SECRET WEAPONS special with a distinctive style and technique quite unlike any other I’ve ever seen attempted on the comics page.”

Before the Secret Weapons take center stage in HARBINGER WARS 2 this May, witness one of the year’s most unlikely and unorthodox origin stories as Heisserer, Allén, and Martín come together again to recount a life lived one item at a time on March 14th in SECRET WEAPONS: OWEN’S STORY #0 – featuring covers by Raúl Allén (NINJAK), rising star Sibylline Meynet, Sija Hong (NINJAK), and Leif Jones (GENERATION ZERO)!