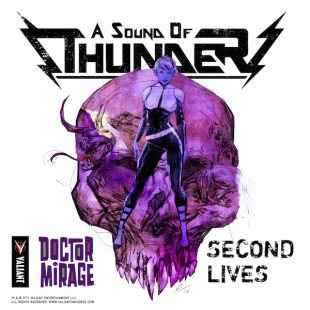 Washington, DC area metal band A Sound of Thunder and award-winning comic book publisherValiant Entertainment are teaming up for “Second Lives” – an all-new EP inspired by the paranormal investigator known as Doctor Mirage!

The “Second Lives” 5-song EP is being offered exclusively via Kickstarter as a companion to A Sound of Thunder’s new album “It Was Metal.” The EP features original cover art by THE DEATH-DEFYING DOCTOR MIRAGE series artist Roberto de la Torre. Fans have until November 13th to pre-order the CD, which will be a limited numbered and autographed edition.

Doctor Mirage talks to the dead, but the only spirit Shan Fong-Mirage couldn’t find was that of her late husband, Hwen. After a perilous trip through the underworld, the two have been reunited, but Hwen is still an intangible spirit of the dead…incapable of opening a spell book or even touching his wife. Now, Valiant’s investigators of the occult and arcane use their gifts to solve homicides, bring peace to the recently bereaved, and look for answers to the mystery that haunts them most: how to restore Hwen’s solid form…

“The captivating atmosphere created by series writer Jen Van Meter and artist Roberto de la Torre really inspired us,” said A Sound of Thunder guitarist Josh Schwartz. “Doctor Mirage’s harrowing journey to the Deadside ignited our creativity and passion for both comics and music. We tried to capture the mood and story of the comics with music that is both dark and exciting.”

“Second Lives” is not A Sound of Thunder’s first character license collaboration with Valiant Entertainment. In 2015, the band released “Tales from the Deadside,” a full-length concept album based on the SHADOWMAN comic series. “Tales from the Deadside” became one of the most successful Kickstarter campaigns ever in the metal category, and upon release, landed on several Billboard music charts: Heatseekers Albums – South Atlantic Region #1, Heatseekers Albums #8, and Hard Rock Albums #16.

Valiant Entertainment is a leading character-based entertainment company that owns the largest independent superhero universe in comics. With more than 81 million issues sold and a library of over 2,000 characters, including X-O Manowar, Bloodshot, Harbinger, Shadowman, Archer & Armstrong, and many more, Valiant is one of the most successful publishers in the history of the comic book medium. Today, the company’s characters continue to be forged in publishing, licensing, film, video games, and beyond. Valiant consistently produces some of the most critically acclaimed comics in the industry and has received numerous industry awards and accolades, including a Diamond Gem Award for Comic Book Publisher of the Year. Most recently, Valiant announced a multi-picture deal to bring Bloodshot and Harbinger to the big screen as feature films. Visit Valiant online at ValiantEntertainment.com.