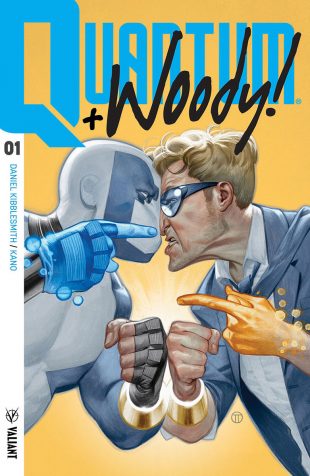 As first revealed at The Washington Post, Valiant is proud to present the first lettered look inside QUANTUM AND WOODY! (2017) #1 – the FIRST ISSUE of the ALL-NEW and UNTRUSTWORTHY ONGOING SERIES from rising star Daniel Kibblesmith (The Late Show with Stephen Colbert) and explosive artist Kano (Daredevil)!

Consider yourself warned…This winter, the world’s worst superhero team is careening back into action! On December 20th, on the heels of X-O MANOWAR (2017) #1, SECRET WEAPONS #1, BLOODSHOT SALVATION #1, and NINJA-K #1, Valiant’s “ICONS” initiative throws the comic book industry’s sense of propriety straight into the wood chipper for the most heartfelt, most eye-popping, and most punching-est superhero-action-family-drama-buddy-comedy throwdown of the year!

“They can’t really break up. They’re joined at the hip. Almost literally,” writer Daniel Kibblesmith told The Washington Post. “Part of that tension is, how long can you really keep up the silent treatment when you have to see this person every day?… You have this extremely practical reason that they’re fighting and it’s sort of two stubborn people playing the role of an unstoppable force meeting an immovable object.”

PLUS: In honor of Quantum and Woody’s upcoming overthrow of comic shops everywhere, Valiant can now “proudly” reveal that each of the new series’ first 12 issues will also feature EXTREME ULTRA-FOIL VARIANTS — a dynamic, new(ish) cover treatment featuring artwork by superstar artist Geoff Shaw (God Country) EMBOSSED and ENHANCED with AUTHENTIC COMICS FOIL FROM THE ‘90s!

BUT WAIT, THERE’S MORE: QUANTUM AND WOODY! (2017) #1 is also saying something it can’t take back with THE MOST VARIANT COVER OF ALL TIME! – an unholy and experimental combination of comic book history’s most noted, notorious, and obnoxious cover gimmicks – chromium, lenticular, embossing, die-cutting, iridescent ink, and more – on one highly limited, meticulously crafted variant cover! In honor the latest ongoing series from Valiant “ICONS”, Valiant is COMBINING AT LEAST EIGHT OF THE MOST POPULAR COVER ENHANCEMENTS EVER PRODUCED ONTO ONE COVER to create a singular piece de resistance that will forever enshrine the world’s worst superhero team in the record books for now and all time!