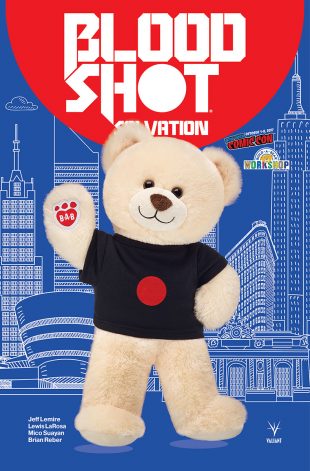 The exclusive “Bloodshot Bear” – produced by Build–A–Bear, a global company – will be strictly limited to 250 pieces and only be available at Valiant Entertainment’s New York Comic Con booth (#1635) from Thursday, October 5th through Sunday, October 8th while  supplies last. Priced at $40, this cuddly, buttercream-colored companion comes complete with an official Bloodshot logo t-shirt, collectible carrying case, and an exclusive BLOODSHOT SALVATION #1 Bear Photo Variant – an all-new edition of the much-anticipated new beginning for Jeff Lemire’s Eisner Award-nominated Bloodshot saga that can only be obtained in tandem with this one-of-kind, NYCC-only offering.

Created by Kevin VanHook, Don Perlin, and Bob Layton in 1992, Bloodshot is one of the most successful new comic book characters of the past two decades with more than 100 issues published and lifetime sales of more than 7 million copies in multiple languages around the world. After returning with a sold-out new series in 2012 and earning dozens awards and nominations from the industry’s most prestigious honors, Bloodshot will soon make his big-screen debut in a hotly anticipated feature film adaption from Sony Pictures, directed by special effects visionary Dave Wilson (Avengers: Age of Ultron), written by Academy Award nominee Eric Heisserer (Arrival), and executive produced by Neal H. Moritz and Toby Jaffe (The Fast and the Furious franchise) for Original Film and Dinesh Shamdasani for Valiant Entertainment.

BUT FIRST: In the wake of the year’s most successful comic-book debuts from any independent publisher with smash hits like X-O MANOWAR (2017) #1 and SECRET WEAPONS #1, Valiant’s next great “ICONS” launch of 2017 begins on September 20th in BLOODSHOT SALVATION #1 – an epic and essential jumping-on point for Valiant’s unstoppable soldier with covers by Kenneth Rocafort (The Ultimates), Monika Palosz (DIVINITY III: STALINVERSE), Tomas Giorello (X-O MANOWAR), Ryan Bodenheim (The Dying & The Dead), Greg Smallwood (Moon Knight), and Dave Johnson (100 Bullets)!

Stay tuned for more news and announcements about Valiant’s slate of NYCC-exclusive comics, merchandise, and more in the coming days and weeks.

Celebrating 20 years of business in 2017, Build–A–Bear is a global brand kids love and parents trust that seeks to add a little more heart to life. Build–A–Bear Workshop has approximately 400 stores worldwide where Guests can create customizable furry friends, including company-owned stores in the United States, Canada, Denmark, Ireland, Puerto Rico, the United Kingdom and China, and franchise stores in Africa, Asia, Australia, Europe, Mexico and the Middle East. The company was named to the Fortune 100 Best Companies to Work For® list for the ninth year in a row in 2017. Build–A–Bear Workshop, Inc. (NYSE:BBW) posted a total revenue of $364.2 million in fiscal 2016. For more information, visit buildabear.com.