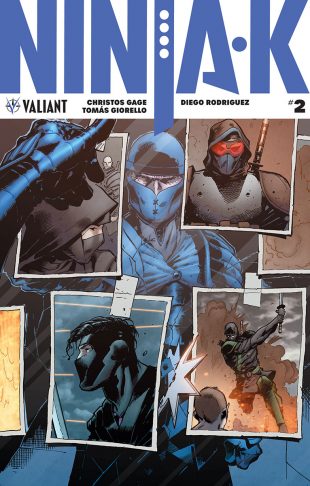 Valiant is proud to present your first look at NINJA-K #2 – the next adrenaline-fueled issue of the EXPLOSIVE NEW ONGOING SERIES charging out of Valiant’s “ICONS” initiative! On December 20th, renowned writer Christos Gage (Netflix’s Daredevil) and Valiant’s latest superstar artist, Tomás Giorello (X-O MANOWAR), dive deep into the top-secret archives of the black-budget spy network that initiated Colin King into the Ninja Programme…and ignite a global manhunt for the relentless killer bent on eliminating all of Her Majesty’s ninja super-spies, past and present!

One by one, the operatives of MI-6’s covert Ninja Programme are being murdered by an unseen threat that is as mysterious as it is deadly. But who could possibly have the knowledge and expertise to eliminate the lethal men and women of Britain’s most secret service… and why are they hellbent on reaping revenge against Colin King and his predecessors? As the walls close in around him, Ninjak must confront the bloodstained legacy that spawned him… before his own name gets crossed off the list…

“[The] Ninja Programme dates back to World War I, as we’ll see,” writer Christos Gage told Newsarama. “But it’s a dangerous job with a high casualty rate. If you think professional athletes have short careers, try being a super-spy! Some lasted longer than others. But ending their career as the top ninja agent didn’t always mean their story ended. That’s what we’re delving into. Colin himself has been Ninjak for a few years, but he’s the first one to be a freelancer… and he’s so good at it, MI-6 let him. But now he’s about to learn about those who came before…and perhaps uncover some things he didn’t know about himself.”

PLUS: Get your first taste of Colin King’s new assignment with an EXCLUSIVE PRELUDE TO NINJA-K #1, available only in NINJAK #0 – in comic shops everywhere today! Before NINJA-K #1 slashes its way into stores on November 15th, follow the impeccably precise killer at the center of the Ninja Programme’s century-old regiment of sabotage and subterfuge with an essential introduction to the winter’s most anticipated new series from writer Christos Gage and artist Tomás Giorello!

THEN: Ninjak’s deadliest mission yet begins on November 15th in NINJA-K #1 – the FIRST ISSUE of the all-new series launching Colin King into the fight of his life!