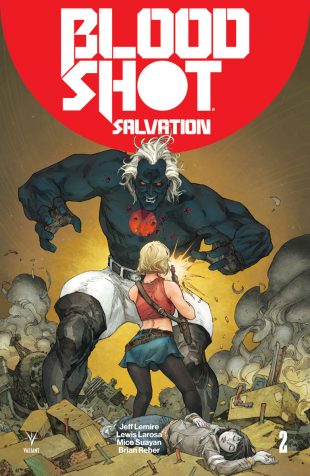 As revealed at Newsarama, Valiant is proud to present your first look inside BLOODSHOT SALVATION #2 – the next bone-breaking chapter of the BLOCKBUSTER ONGOING SERIES from New York Times best-selling writer Jeff Lemire (THE VALIANT, Moon Knight) and extraordinary artists Lewis LaRosa (BLOODSHOT REBORN) and Mico Suayan (BLOODSHOT REBORN)! This October, Ray Garrison – the cutting-edge war machine codenamed Bloodshot – will be wrenched back into the destructive ways he left behind for a soul-shattering mission to save his wife and daughter from a gallery of terrifying new threats… His next target? The technologically augmented powerhouse named Rampage!

This October, Jeff Lemire, Lewis LaRosa, and Mico Suayan soldier forward into a heartbreaking tale of villains, vengeance, and vendettas soon to be fulfilled that will define Bloodshot’s future once and for all time, only in BLOODSHOT SALVATION #2 – featuring covers by Kenneth Rocafort (The Ultimates), Monika Palosz (X-O MANOWAR), Philip Tan (Suicide Squad), Greg Smallwood (Moon Knight), and Glenn Fabry (Preacher)!