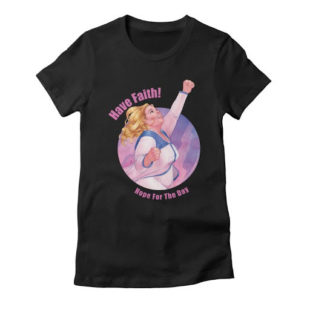 Chicago, Illinois (May 1st, 2017) – To mark the 68th annual Mental Health Awareness Month during the month of May, award-winning comic book publisher Valiant Entertainment and Threadless Artist Shops will offer a selection of limited-edition t-shirts featuring Faith, Valiant’s groundbreaking comic book character. All proceeds from the items sold will be donated to Hope for the Day, the mental health education and suicide prevention organization.

“Myself and many of us at Threadless and our community have family/friends who struggle with mental health issues. We are proud to support an organization working hard to help others deal with these issues and show they are not alone,” said Lance Curran, Artist Shops Account Director for Threadless.

“It is an honor to work with so many talented people and friends from Threadless and Valiant on this project during Mental Health Awareness month. It is truly amazing to see the impact we can make and what we can accomplish as a community that refuses to stay silent about mental health,” said Jonny Boucher, Founder & CEO of Hope for the Day.

Created by former Marvel Editor-in-Chief Jim Shooter and Eisner Award-winning writer and artist David Lapham in Valiant’s acclaimed HARBINGER series in 1992, Faith has long been a central icon of Valiant’s award-winning publishing line. Then, in early 2016, Faith took her long-awaited, much-demanded first step toward solo stardom with FAITH #1 – a groundbreaking debut that quickly became the first and fastest breakout hit of the year from any major comics publisher. In the months since, Faith’s adventures have garnered near-universal critical acclaim and attention from a host of international media outlets, including The Atlantic, Cosmopolitan, The Guardian, The Hollywood Reporter, The Huffington Post, The Independent, MTV, The New York Times, NPR, Nylon, PBS, People, Seventeen, Today, Vox, The Washington Post, and dozens more.

Threadless’ Hope For The DayArtist Shop can be found at https://hopefortheday.threadless.com/and, in addition to the newly unveiled Faith design courtesy of Valiant, will also feature new, limited-edition contributions from popular Chicago radio station b96, world-renowned artist Derek Hess, and mental health advocate and illustrator Sow Ay through the month of May.

Artist Shops Are For Everyone!
Whether your focus is art, photography, music, philanthropy, sports, entrepreneurship, or anything else…Artist Shops is for you! Set up a free online merch store in minutes without worrying about manufacturing, order fulfillment, customer service, or any other logistics. You focus on what you do best, we’ll do the rest!

Founded in 2011 by Jonny Boucher, Hope For The Day (HFTD) is a global non-profit organization that achieves proactive suicide prevention by providing outreach and mental health education through self-expression platforms. Their team does outreach raising the visibility of resources for support and provides mental health education to equip and empower a grassroots movement for peer to peer proactive prevention that is a sustainable model for evolving social and institutional policies. At Hope For The Day, the team knows that prevention starts with a conversation, and It’s Ok Not To Be Ok.