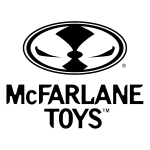 McFarlane Toys is the fifth largest action figure manufacturer in the United States. Established in 1994 to manufacture and sell action figures based on founder Todd McFarlane’s comic book character Spawn, the international award-winning company has expanded into licensed products to become one of the premiere action figure producers on the planet.

The company works with many of the top entertainment properties in the industry and has the official rights to NFL and the NBA. Marquee toy lines include: Destiny, Stranger Things, Five Nights at Freddy’s, AMC’s The Walking Dead and more..

McFarlane Toys action figures are sold worldwide through McFarlane companies in the United States and Canada, and by distributors from Europe to Japan and Australia. Please see the Where to Buy section of each product page to see specific retailer information.