Cover A by JON DAVIS-HUNT

Cover B by CASPAR WIJNGAARD

• The bone-chilling team of Cullen Bunn and Jon Davis-Hunt bring forth a terrifying tale in this can’t miss new chapter of Valiant’s hit horror series.

• The hellscape known as the Deadside has pried open a doorway to Earth in Enoch, Arizona! And our only chance at survival against the awakening desert beasts is SHADOWMAN.

Cover A by MARCUS TO

Cover B by PAULINA GANUCHEAU

• What do you get when you cross evil mad scientists, too many video games, and monsters from another dimension? DINOSAURS WITH JETPACKS AND LASERS!

• It’s an all-out brawl to save our dimension from Project Bizaree’s evil quest to become one with the Faraway. And only Savage can save us. Or he’ll die trying. 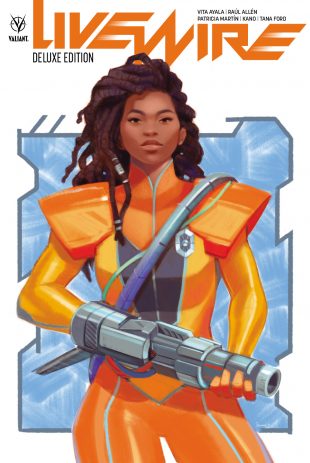 • Mentor. Savior. Enemy of the State.

• Livewire is on the run after plunging the United States into a nationwide blackout to stop the exploitation of the psiots she is sworn to protect. Now, she’ll have to outrun the government she once served and those she once called allies while finding herself called on to track down disappearing psiots. Can she overcome the political forces out to get her or will she become what the world condemns her as, a traitor?

• Collecting LIVEWIRE #1–12, along with more than 20
pages of rarely seen art and extras