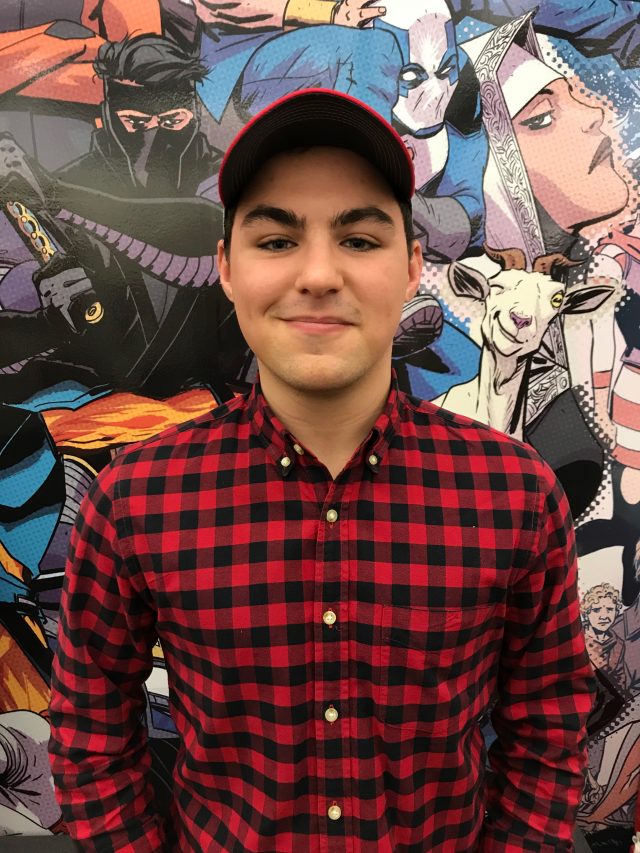 As part of our Virtual Valiant HQ Fridays, we wanted to give everyone an opportunity to get to know the folks behind the scenes here at Valiant HQ. This week, we sat down with Associate Editor, David Menchel, to ask about his role, what he’s been reading lately, and some thrilling upcoming projects.

Valiant: What does the Associate Editor do?

DM: I was an intern at first, actually. At the end of my junior year of college I applied to Valiant’s internship program and was lucky enough to be brought aboard during the fall semester of my senior year. I gave it my all and was asked back for my spring semester. By the time I graduated come May, I had made enough of a good impression to be considered for an editorial assistant position.

Valiant: What are your top three comics of all time?

DM: How is that a fair question? My favorite comics are always changing because I’m always experiencing new stories, I think the idea of “favorite” is a very fluid notion. I can tell you what my three most influential comics of all time are! And that’d be The Long Halloween, Watchmen (of course), and probably Jason Aaron’s Thor.

DM: Quarantine has been a huge moment of catch up and exploration for me. I’m taking the time to finally dig through that giant stack of comics on my nightstand that’s a single issue away from falling over entirely. I’m finally caught up on Batman and Superman and Batman/Superman, Hickman’s X-Men, I finally tried out the first volume of Saga (currently waiting to get my hands on volume two), next up will probably be DCeased and then Curse of the White Knight. I’m also halfway through Snyder and Lemire’s AD: After Death.

DM: The first Valiant comic I ever read was Venditti’s X-O MANOWAR, I bought it as part of a Comixology sale that came with the first volumes of BLOODSHOT, ARCHER & ARMSTRONG, and HARBINGER, back in… I want to say 2014. I knew right away I’d found my favorite new universe.

DM: The answer to that question will probably always be Rai. I love the dichotomy of his character, the internal conflict of his humanity versus his cybernetics. I think he’s a character rich with story potential, especially considering all his Father issues as well.

DM: There’s an element of reliability to Valiant books. I think the world our stories are set in is the one that most closely resembles real life, and our heroes are no exception to that either. Honestly, I’d even hesitate to call them heroes. They’re extremely flawed characters who have largely personalized motivations, most times drafted into a fight and begrudgingly doing what’s right. They’re a pretty clear reflection of humanity, and I think that makes the Valiant Universe deeper, more real, and a lot more relatable than other comics.

DM: Is all of them an okay response? There’s a lot to be excited about coming up from Valiant. SAVAGE is a personal highlight for me, it’s a book that manages to balance fun and extreme violence in a truly chaotic, unbelievable way. The new SHADOWMAN book is also primed to be up there. It’s taking Shadowman, introducing a few new powers, and placing him inside of the horror genre for the first time in the character’s history. I also have to give a special shout out to the new HARBINGER book we’ve been teasing. While it hasn’t been officially announced yet, it’s the project I’m most excited about that I can’t really talk about.

DM: By far and away, that’s the people. And not just my office mates — although they do have their moments. But the freelancers, the comics community, the Valiant fans, getting to interact with all of them is the coolest part of this job. Some of the nicest, most genuinely passionate people I have ever met. If you’re into comics in any way, shape or form, you’re awesome.

DM: Go to conventions, talk to as many people as you can, build a portfolio for yourself through indie projects and self-publishing avenues. Put together an anthology with the help of some friends. Things like that go a long way, but also, I think the real key is just to be respectful. Be kind to people. The people you work with on those DIY projects, the artists and writers you shake hands with at conventions, everyone deserves respect and they’re going to remember who treated them with it and who didn’t. The comics industry is small, and everybody talks. Trust me, you want that talk to be positive.