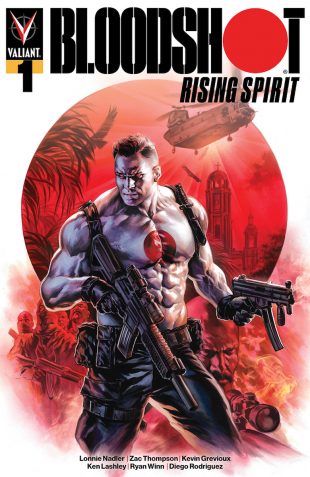 Valiant is proud to announce that BLOODSHOT RISING SPIRIT #1 – the first issue of the pulse-pounding origin series by Kevin Grevioux (New Warriors), Lonnie Nadler (Cable), Zac Thompson(The Dregs), and artist Ken Lashley (X-Men) – has sold out at the distributor level and will return to stores everywhere with the BLOODSHOT RISING SPIRIT #1 SECOND PRINTING on December 19th, 2018!

Surpassing previous sales records for BLOODSHOT (2012)  #1, BLOODSHOT REBORN #1, and BLOODSHOT SALVATION #1, BLOODSHOT RISING SPIRIT #1 has already ascended to the ranks of Valiant’s most celebrated titles as the highest-selling Bloodshot series in the modern era!

On December 19th, find out why fans and critics hail BLOODSHOT RISING SPIRIT #1 as a tour de force premiere for the next essential Valiant series, documenting Project Rising Spirit’s path to creating the perfect instrument of destruction:

“A strong step forward for the re-invigoration of the character.” – The Brazen Bull

“The dialogue is good, the artwork is dynamic, and the pace keeps up through this first issue.” – The Fanboy Factor

“Amazing, brutal artwork that shows off the destruction of Bloodshot’s rage…” – Everything Action

“If [BLOODSHOT SIRING SPIRIT #1] is your first time reading Bloodshot or anything from Valiant, this is the perfect place to be introduced.” – Rogues Portal

Plus, in stores that same day: The back-breaking action rages onward in BLOODSHOT RISING SPIRIT #2,  the next chapter in an unstoppable new series delving deep into the violent legacy of the man-turned-machine known as…Bloodshot!