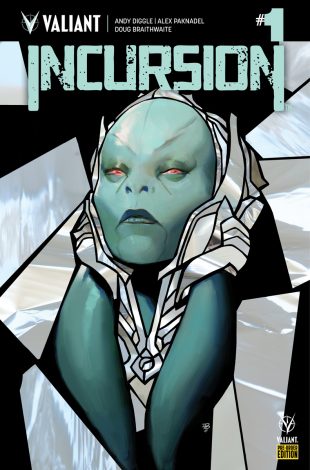 Valiant is proud to present the INCURSION #1-4 PRE-ORDER EDITION BUNDLE, available only as a set to fans who reserve the entire series with their local comic shop by the final order cut-off date (FOC) of January 28, 2019!

Released monthly from February 2019 through May 2019, each PRE-ORDER EDITION comes packed with trade paperback-style extras and bonus content, including creator commentary, behind-the-scenes looks at the creation of the comics, process character designs and artwork, and first looks at upcoming issues, plus exclusive covers that can’t be found anywhere else, beginning with powerhouse artist Tonci Zonjic (Lobster Johnson) – all at no extra charge!

Fans and retailers, take note: The only way to obtain the exclusive INCURSION #1-4 PRE-ORDER EDITION BUNDLE is to order all four issues with your local comic shop by the FOC date of January 28, 2019! No more copies will be made available beyond that date and subsequent issues will not be offered in later solicitations!

Plus: In anticipation of the Eternal Warrior’s return to a new limited series in INCURSION #1, Valiant is excited to announce a brand-new ONE DOLLAR DEBUT, reprinting the first issue of 2015’s best-selling series: WRATH OF THE ETERNAL WARRIOR #1 by Robert Venditti (X-O MANOWAR), Raúl Allén(LIVEWIRE), and Patricia Martín (SECRET WEAPONS)!

For five millennia, the Eternal Warrior has shaped history at the end of his sword. He’s razed empires, toppled civilizations, and broken armies as an immortal soldier in service to the Earth.

But now, the Eternal Warrior has been torn from the world he once protected and finds himself stranded in a hostile alien landscape unlike any he’s faced before. Separated from his earthly environs, can history’s deadliest soldier survive a realm far older, far deadlier, and far more ruinous than anything he’s ever encountered? Beyond Earth lies eternity…

First, on February 6th, WRATH OF THE ETERNAL WARRIOR #1 returns to comic shops everywhere… And then on February 20th, master storytellers Andy Diggle, Alex Paknadel, and Doug Braithwaite reveal a story that will rock the Valiant Universe across dimensions in INCURSION #1 – featuring covers by Doug Braithwaite (Justice) and Roberto de la Torre (NINJA-K)!