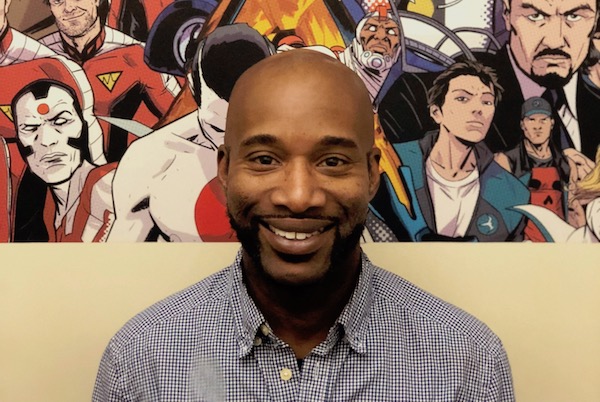 New York, NY (October 3, 2018) – Valiant Entertainment is proud to announce that Editor Karl Bollers has been promoted to Senior Editor, effective immediately. Bollers, a longtime comics veteran and Eisner Award nominee, first joined the publisher in March and, in a very short time, elevated himself to the next level in his Valiant career.

“I am truly grateful to receive this honor,” said Bollers. “Working at Valiant has been a fulfilling and rewarding experience. From the immense creative talent involved with crafting the best stories possible, to the unparalleled passion of our loyal fans, and, finally, the great team of individuals who support me on a daily basis, this is a wonderful place to be.”

Bollers has more than 20 years of experience in all facets of the comics industry. A former Associate Editor and Assistant Editor at Marvel Entertainment, Bollers contributed to multiple Marvel series as a writer, including Emma Frost, Soldier X, What If?, and X-51: Machine Man, and later helmed a fan-favorite, 80-issue run on Archie’s Sonic the Hedgehog, for which he served as both writer and colorist. Bollers’ most recent credits include Valiant’s ARCHER & ARMSTRONG with artist Clayton Henry, and New Paradigm’s nominated Watson and Holmes series with artist Rick Leonardi, for which he earned a 2014 Eisner Award nomination for “Best New Series.”

Bollers will play an increased role in the development of new projects, casting of comic talent, and editing of current and upcoming titles. He will be responsible for spearheading projects with Valiant’s beloved iconic superheroes, as well as characters throughout the company’s library of heroes. The Valiant editorial team is currently headed by Executive Editor Joseph Illidge and includes Editorial Director Robert Meyers, Editor Lysa Hawkins, and Assistant Editor David Menchel.

“The entire Valiant team is thrilled to have Karl in this expanded role!” remarked Illidge. “Karl’s passion for story, commitment to high quality, and his industry knowledge all speak to why his new role as Senior Editor is crucial for the future of Valiant. We can’t wait for you to see the new projects and creators he’s bringing to the table!”