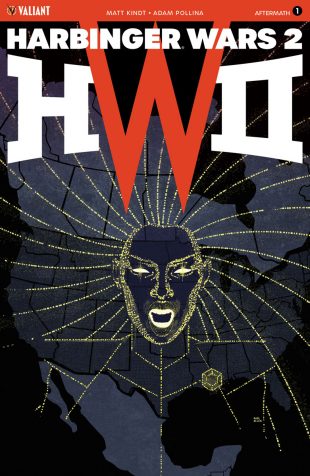 As revealed today on Graphic Policy, Valiant is proud to present another peek within the pages of HARBINGER WARS 2: AFTERMATH #1 before the seismic standalone epilogue hits stores on September 26th! Eisner-nominated writer Matt Kindt (X-O MANOWAR, Mind MGMT) has broken down the Valiant Universe in its biggest, most brutal event ever published… Now, he and legendary comic artist Adam Pollina (X-Force) will begin to rebuild!

Plus: Don’t miss HARBINGER WARS 2 #4, out in stores today! At last, the final battle by New York Times best-selling scribe Matt Kindt and superstar artists Tómas Giorello (NINJA-K) and Renato Guedes (SHADOWMAN) has begun – and no one will get out unscathed!