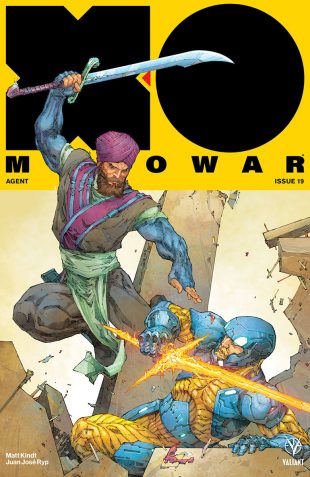 As first revealed at Comics Bulletin, Valiant Entertainment is proud to announce an explosive new story arc for the publisher’s critically acclaimed X-O MANOWAR series: “AGENT,” starting with X-O MANOWAR (2017) #19! Beginning on September 26th, Eisner-nominated writer Matt Kindt (ETERNITY) and incendiary artist Juan José Ryp (BRITANNIA) install Aric of Dacia as an operative of the Global Agency for Threat Excision, to face off against a fantastic new world of gods, myths, and heroes!

Featuring the return of characters from within the pages of ETERNITY, writer Matt Kindt and transcendental artist Trevor Hairsine’s seminal experiment in cosmic storytelling, X-O MANOWAR #19 will bring two of Valiant’s most beloved science fiction epics together for the ultimate meeting of space-faring warriors!

“After the events in ETERNITY, Divinity came back to Earth and everything reset to a degree,” writer Matt Kindt told Comics Bulletin. “Except Divinity brought some problems back with him…or, more accurately, some problems followed Divinity back home to Earth. We kind of teased this a little bit at the end of ETERNITY but how it manifests itself is going to be pretty nuts. We’re bringing the cosmic to Earth!”

But first: witness X-O Manowar’s shocking return to Earth as the alien-enhanced barbarian chooses his side in the SEISMIC COMICS EVENT OF 2018: HARBINGER WARS #2! On May 30th, New York Times best-selling writer Matt Kindt and superstar artist Tomás Giorello (X-O MANOWAR) tear the country in two as the heaviest hitters in the Valiant Universe take aim at one another in an all-out confrontation!