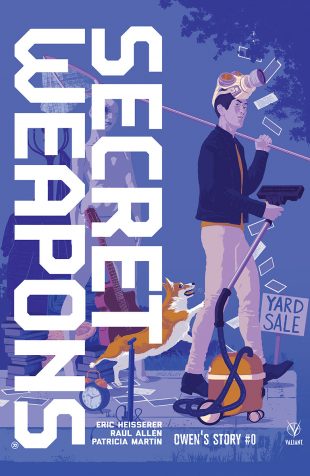 Valiant is proud to announce that SECRET WEAPONS: OWEN’S STORY #0 – another essential special issue from the world of 2017’s best-selling independent limited series by Academy Award nominee Eric Heisserer (Arrival) and Harvey Award-nominated artists Raúl Allén (BLOODSHOT REBORN) and Patricia Martín (WRATH OF THE ETERNAL WARRIOR) – has sold out at the distributor level and will return to store shelves everywhere with the SECRET WEAPONS: OWEN’S STORY #0 SECOND PRINTING!

On May 2nd, the complete SECRET WEAPONS creative team reunites for an all-new, standalone tale spotlighting a day in the all-too-complicated life of Owen Cho, one of Livewire’s new recruits and quite possibly the Secret Weapons’ most unique talent of all!

Owen Cho is a conjurer, which can be a great deal more frustrating than it sounds. You see, Owen’s “psiot” ability – unlocked at great expense and even greater danger by Toyo Harada’s Harbinger Foundation – allows him to materialize objects out of thin air, but he can’t control what to summon or when it might arrive. Worse yet, his gift has landed him in a heap of trouble over the years… Namely, it got him locked away in The Willows – an off-the-grid facility for abstruse superhumans like himself – before Livewire and her team of like-minded “secret weapons” gave him a path with purpose…But what do you do with a heap of undesirable objects summoned from parts unknown, anyway? Have a garage sale, of course!

Before the Secret Weapons take center stage in HARBINGER WARS 2 this summer, witness one of the year’s most unlikely and unorthodox origin stories on May 2nd as Heisserer, Allén, and Martín come together once again to recount a life lived one item at a time in SECRET WEAPONS: OWEN’S STORY #0!

On May 2nd, witness the ground-zero moment for the future of the Valiant Universe – and the perfect introduction to all of Valiant’s biggest icons from one of the most acclaimed creative teams in comics today – in HARBINGER WARS 2: PRELUDE #1! Featuring covers by Raúl Allén (BLOODSHOT REBORN), Michael Cho (Batwoman), Cary Nord (X-O MANOWAR), and Felipe Massafera (Flashpoint: Abin Sur)!