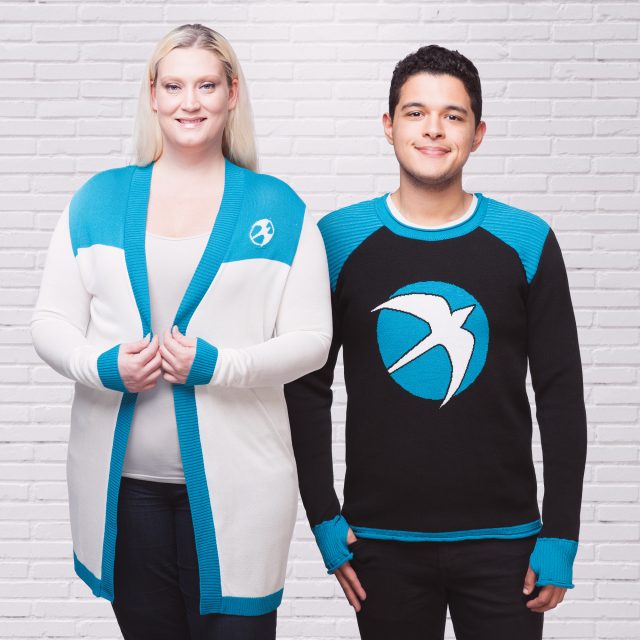 Debuting today exclusively at ThinkGeek, Valiant Entertainment and Elhoffer Design are proud to unveil a new fashion-forward line of women’s and unisex apparel inspired by Valiant’s internationally renowned, breakout superhero sensation, Faith, and her allies on the Harbinger team of super-powered teenagers.

As detailed at Bustle, Valiant – the award-winning publisher behind the largest independent library of superhero characters anywhere in the comics industry – has teamed with ThinkGeek and Elhoffer to realize “The Faith Collection.” Designed by Catherine Elhoffer of Elhoffer Design and available just in time for Valentine’s Day, Valiant’s first-ever line of women’s designer fashion is flying high with three initial offerings: 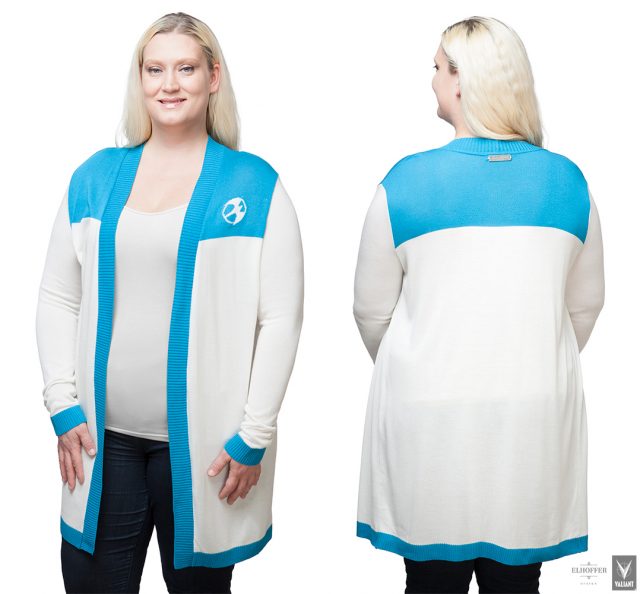 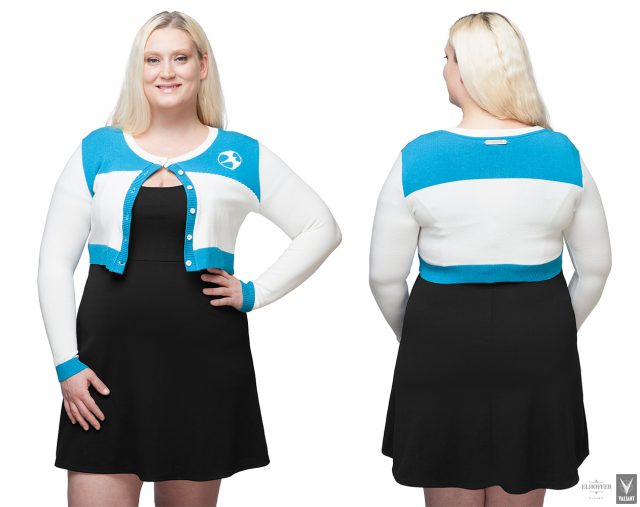 $49.99 | Sizes XS-4XL
Officially licensed Faith merchandise from Valiant
A ThinkGeek exclusive from our friends at Elhoffer Design
Buttons up the front but is super-cute open, too
Harbinger logo knitted into the front left chest
Elhoffer metal tag on back
www.thinkgeek.com/product/kmmu 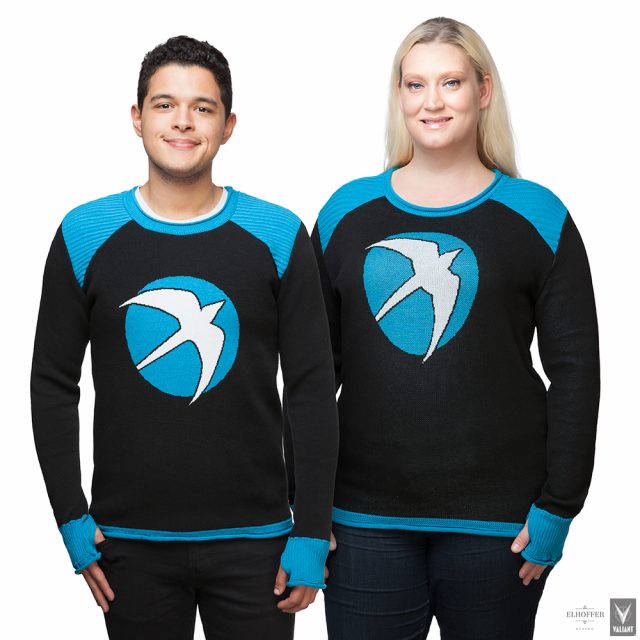 “We are always excited to honor and celebrate important women in comics, and what better time to do so than during Valentine’s Day?” said Jen Yi, Product Manager at ThinkGeek. “It’s been great to partner with Valiant and Elhoffer Design to create these amazing sweaters and shirts to share the celebration with other die-hard fans.”

“It was an absolute honor and pleasure to not only be approached by Valiant Entertainment to design and create this collection, but to get to work with such an exciting and welcoming team,” said Catherine Elhoffer, Designer and President of Elhoffer Design. “Valiant has been downright fantastic to team up with, and I hope to create even more with them in the future! Faith is a superhero that is close to my heart, as I’m also a plus-size girl. She’s inspired me to help save the world in the way I know how: making fashion that helps everyone feel empowered and invincible!”

Created by former Marvel Editor-in-Chief Jim Shooter and Eisner Award-winning writer and artist David Lapham in Valiant’s acclaimed HARBINGER series in 1992, Faith has long been a central icon of Valiant’s award-winning publishing line. Then, in 2016, Faith took her long-awaited, much-demanded first step toward solo stardom with FAITH #1 – a groundbreaking debut that quickly became one of the year’s biggest breakout hits from any major comics publisher. In the years since, Faith’s solo adventures have garnered near-universal critical acclaim and generated worldwide attention from international media outlets, including The Atlantic, The A.V. Club, Cosmopolitan, The Guardian, The Hollywood Reporter, The Huffington Post, The Independent, MTV, The New York Times, NPR, PBS Newshour, People, Seventeen, Today, Vox, The Washington Post, and dozens more. Most recently, in 2017, her ongoing series was nominated for an Eisner Award – one of the comic book industry’s most prestigious honors – for “Best New Series.”

Faith will soon fly onto the big screen alongside her teammates in a HARBINGER feature film from Sony Pictures and produced by Neal Mortiz’s Original Film (The Fast & The Furious franchise).

ThinkGeek is the premier retailer for the global geek community. Since 1999, ThinkGeek has been creating a world where everyone can express and celebrate their inner geek, turn their interests into passions, and connect with one another. We are obsessed with creating and sharing unique and authentic experiences that stimulate our fans’ imaginations and fuel their geek core. We believe there is a geek in everyone and invite you to Join In. Geek Out. Learn more at ThinkGeek.com.

Elhoffer Design was founded by Catherine Elhoffer in 2016 after she worked for years for others in the geek fashion world and as a costume designer in Hollywood. She started by crafting every piece she sold with her own hands, but quickly expanded to working with small factories in Los Angeles to make small runs and limited quantities. She oversees new designs and still often makes the first samples to ensure the design is perfect. Flattering curvy bodies and putting pockets in as much as possible are her two major rules when designing, with the goal of empowering all women to feel amazing when going out to conquer the world.