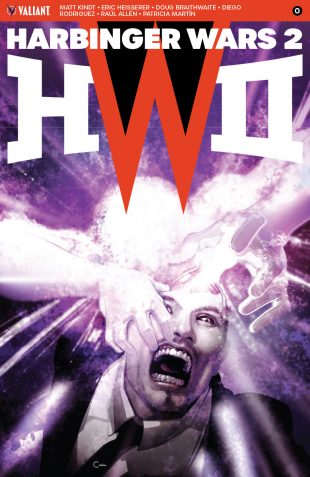 As first revealed at Comic Book Resources, Valiant is proud to announce that copies of HARBINGER WARS 2 #0 – a limited-edition prelude to the seismic 2018 crossover event, available EXCLUSIVELY to fans that redeemed a select set of mail-away coupons in HARBINGER RENEGADE #1-4 – have now shipped directly from Valiant’s New York City headquarters and will soon be arriving in thousands of households worldwide!

Valiant’s biggest and most ambitious event starts right here, with a completely self-contained introduction to the highest stakes conflict that the Valiant Universe has ever witnessed… As the march towards HARBINGER WARS 2 builds over the coming months, a new and terrible force is about to reveal itself to the heroes of the Valiant Universe… Now, comics fans worldwide can get their first glimpse of the cataclysmic clash that is to come in HARBINGER WARS 2 #0!

Featuring the Harbinger Renegades, H.A.R.D. Corps, and surprise guests assembled from throughout the Valiant Universe, HARBINGER WARS 2 #0 has been produced as a reward for Valiant’s most ardent longtime fans, and the events of the issue will be entirely self-contained. As such, HARBINGER WARS 2 #0 will enhance, but not directly impact comprehension of, the primary HARBINGER WARS 2 comics event coming soon to comic shops everywhere.

For the rare and immensely powerful subset of humanity known as psiots, their unique abilities have come with an enormous cost. Once, their existence was known only to a select few. Now, the revelation that thousands of these latent “harbingers” secretly live among us…with the potential to become active any moment…has led the American government to a dramatic tipping point…

Armed with new extra-governmental authority, the deep-black military contractor known as OMEN has been authorized to identify, evaluate, and, if need be, eliminate all supernormal threats to the homeland. H.A.R.D. Corps units have been deployed into cities and towns across the United States to enforce their orders.

Next summer, the blockbuster comics event of the New Year erupts in full force as X-O Manowar, Livewire, the Harbinger Renegades, Bloodshot, the Secret Weapons, Ninjak, and a cast of thousands draw their battle lines in HARBINGER WAR 2 #1 (of 4) – featuring covers by superstar artist J.G. Jones (Final Crisis) and more top talents soon to be revealed!