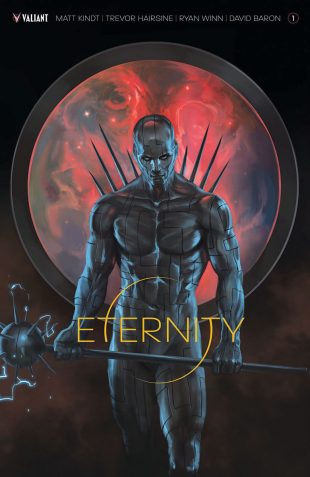 Valiant is proud to announce that ETERNITY #1 (of 4) – the FIRST ISSUE of the VISIONARY NEW SERIES from the minds of New York Times best-selling writer Matt Kindt (X-O MANOWAR, Mind MGMT) and blockbuster artist Trevor Hairsine (DIVINITY, X-Men: Deadly Genesis) – has sold out at the distributor level and will return with the ETERNITY #1 SECOND PRINTING!

On December 27th, jump on board the year’s most mind-bending cosmic epic as two of Valiant’s most powerful and intrepid creative visionaries follow in the sold-out, critically acclaimed footsteps of DIVINITY, DIVINITY II, and DIVINITY III: STALINVERSE to lead an odyssey into a new plane of existence beyond our own…and chart a course through an infinite universe of new worlds, new beings, and new myths…

On December 27th, find out firsthand why Kindt and Hairsine’s exploration of an infinite cosmos of godlike beings and eons-old civilizations is being heralded by fans and critics as one of the year’s most essential comics debuts:

“A multi-dimensional epic…giving Kindt and Hairsine the opportunity to channel the energy and imagination of Kirby’s work.” – The A.V. Club

“✮✮✮✮✮… Another step on the road of comics glory… Amazing.” – PopCultHQ

A staggering spectacle of comic-book science fiction forged in the fantastic tradition of Jack Kirby and Moebius, Kindt & Hairsine’s ETERNITY is a transcendent new vision of gods and legends that will expand the borders of the Valiant Universe once and for all time! The age of ETERNITY is nigh! Start the 21st century’s next great modern myth anew when the ETERNITY #1 SECOND PRINTING returns to comics shops everywhere on December 27th – featuring cover artwork by Jelena Kevic-Djurdjevic (FAITH, Thor)!