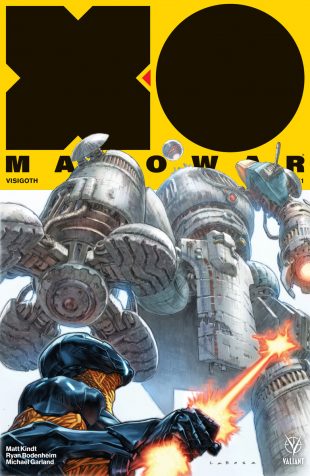 As revealed at Newsarama, Valiant is proud to present your first lettered look inside X-O MANOWAR (2017) #11– the FIRST ISSUE of “VISIGOTH,” an ALL-NEW JUMPING-ON POINT for 2017’s best-selling comics powerhouse from New York Times best-selling writer Matt Kindt (ETERNITY, Mind MGMT) and astonishing artist Ryan Bodenheim (The Dying & The Dead)! From “SOLDIER” to “GENERAL” to “EMPEROR”…to outcast! The whole of X-O Manowar’s battle-fueled past year in the Valiant Universe has all led to this…and now the fate of Earth’s last Visigoth – and the extraterrestrial kingdom he brought to order beneath his armored gauntlet – is about to be decided in blood and steel…

Plus: Arriving in stores alongside X-O MANOWAR (2017) #11 on January 24th, get caught up on Aric of Dacia’s ascension to the throne with the X-O MANOWAR (2017) VOL 3: EMPEROR trade paperback collection – re-presenting the series’ latest chronicle of war amongst the stars by New York Times best-selling writer Matt Kindt (DIVINITY, Dept. H) and blockbuster artists Clayton Crain (RAI, Carnage) and Renato Guedes (Wolverine) for the low, introductory price of just $9.99!