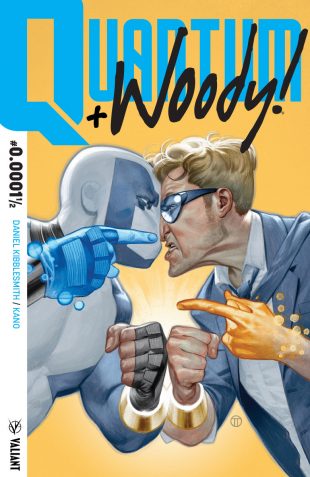 Valiant is proud to present QUANTUM AND WOODY! #0.0001½ – a special, digital-first and entirely FREE introduction to the ALL-NEW and UNTRUSTWORTHY ONGOING SERIES from rising star Daniel Kibblesmith (The Late Show with Stephen Colbert) and explosive artist Kano (Daredevil), available to read right now on ValiantEntertainment.com and the official Valiant Entertainment mobile app for iOS!

Want to read to QUANTUM AND WOODY! (2017) #1 before it hits store shelves on December 20th? Well…you can’t! Not yet, anyway. Wait, please don’t leave – we have something that’s kinda sorta better! Right now, exclusively on ValiantEntertainment.com and the Valiant mobile app, join special guest artist Joe Eisma (FAITH, Archie) as super-powered brothers Eric and Woody Henderson lead a personally guided overview of the 20-year history of the world’s worst superhero team – featuring guest (re)appearances by original series creators Christopher Priest and M.D. Bright, alongside James Asmus, Tom Fowler, and a glossy 8×11” headshot of none other than Daniel Kibblesmith himself. (In case anyone asks, we have permission!)

You know their checkered reputations…and you’ve probably heard a thing or two about their goat. Now find out the truth behind Washington, D.C.’s hardest-hitting, least-insured heroes – and get an extended look inside their all-new monthly series coming this winter from red-hot creators Daniel Kibblesmith and Kano – with this one-of-kind (and, hey, let’s be frank: mostly blank) digital-first release, available only on the interwebs right here!

Then: On the heels of X-O MANOWAR (2017) #1, SECRET WEAPONS #1, BLOODSHOT SALVATION #1, and NINJA-K #1, Valiant’s “ICONS” initiative throws the comic book industry’s sense of propriety straight into the wood chipper for the most heartfelt, most eye-popping, and most punching-est superhero-action-family-drama-buddy-comedy throwdown of the year on December 20th when QUANTUM AND WOODY! (2017) comes roaring into comic shops everywhere!

PLUS: Hey comics fans, it’s not too late to pop in there and place an order for your very own QUANTUM AND WOODY! (2017) #1-4 PRE-ORDER EDITION BUNDLE – available only as a pre-order set to fans who reserve the first four issues of this comics piece de resistance!