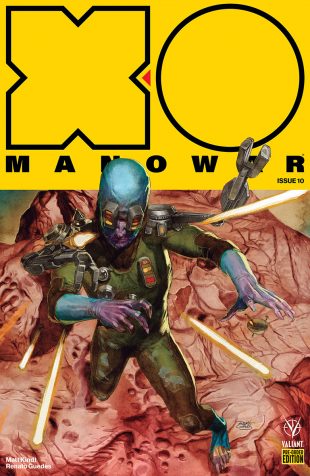 Valiant is proud to present the X-O MANOWAR #10-14 PRE-ORDER EDITION BUNDLE – available only as a pre-order set to fans who reserve the series’ next armor-plated jumping-on point, “VISIGOTH,” with their local comic shop by the initial order date (IOD) of October 26th, 2017!

Released monthly from December 2017 through April 2018, each PRE-ORDER EDITION comes packed with trade paperback-style extras and bonus content, including creator commentary, behind-the-scenes looks at the creation of the comics, process character designs and artwork, and first looks at upcoming issues – plus exclusive covers by Renato Guedes and Ryan Bodenheim that can’t be found anywhere else!

One does not rise to power without making enemies along the way… and for X-O Manowar, the armored emperor of the planet Gorin, those enemies’ grievances have now come due. To end his reign, Aric of Dacia’s adversaries have paid a blood-fueled bounty to a ragtag assemblage of the cosmos’s most feared undesirables and cutthroat killers – alien beings whose viciousness is matched only by their greed. And their hunt starts… now.

Fans and retailers, take note: The only way to obtain the X-O MANOWAR (2017) #10-14 PRE-ORDER EDITION BUNDLE is to pre-order all five issues with your local comic shop by the initial order date of October 26th, 2017! No more copies will be made available beyond that date and subsequent issues will not be offered in later solicitations!

Available only as a pre-order set to fans who reserve the next five issues from world-building writer Matt Kindt and stunning interior artists Renato Guedes and Ryan Bodenheim, the X-O MANOWAR (2017) #10-14 PRE-ORDER EDITION BUNDLE – five 40-page, massively expanded editions of X-O Manowar’s next staggering story arc “VISIGOTH”, alongside two shocking standalone stories – can only be ordered as a set and must be ordered with your local comic shop by the initial order date of October 26th, 2017!