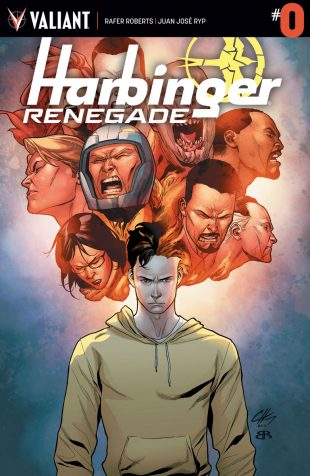 After “MASSACRE”… Before HARBINGER WARS 2… A Seminal Secret at the Heart of the HARBINGER Mythos is About to be Revealed!

As revealed at ComicBook.com, Valiant is proud to announce HARBINGER RENEGADE #0 – AN ALL-NEW JUMPING-ON POINT on the road to HARBINGER WARS 2, Valiant’s seismic 2018 crossover event! On November 8th, multiple Harvey Award nominee Rafer Roberts (Plastic Farm) and incendiary artist Juan Jose Ryp (BRITANNIA) unearth a devastating revelation that will forever alter the course of what we thought we knew about the history of Toyo Harada’s Harbinger Foundation and the place of the telekinetically gifted individuals known as psiots in the Valiant Universe!

“For more than a year, we have been been secretly architecting the groundwork for HARBINGER WARS 2 – the most impactful and ambitious Valiant event ever attempted – across the Valiant Universe in series like X-O MANOWAR, SECRET WEAPONS and, perhaps more so than any other, HARBINGER RENEGADE,” said Valiant CEO & Chief Creative Officer Dinesh Shamdasani. “HARBINGER RENEGADE #0 is the ultimate capstone to that build-up, and will reveal a secret that has been teased since the very first pages of HARBINGER #1 back in 2012. Peter Stanchek, Toyo Harada, and Harada’s former protege, Alexander Solomon – these are some of the most important and powerful characters in Valiant history and, when the dust settles from the events of this issue, the scope, scale and importance of their role in HARBINGER WARS 2 will be clear for all to see.”

Out of the ashes of “MASSACRE,” the march towards the most consequential Valiant event of all time continues with an epic revelation at the heart of the HARBINGER mythos in HARBINGER RENEGADE #0 – as told by Harvey Award-nominated writer Rafer Roberts (Plastic Farm) and incendiary artist Juan José Ryp (BRITANNIA) and featuring covers by Clayton Henry (HARBINGER WARS), Roberto de la Torre (Daredevil), Juan Jose Ryp (NINJAK), Khari Evans (HARBINGER), and Ben Tiesma (BLOODSHOT’S DAY OFF)!