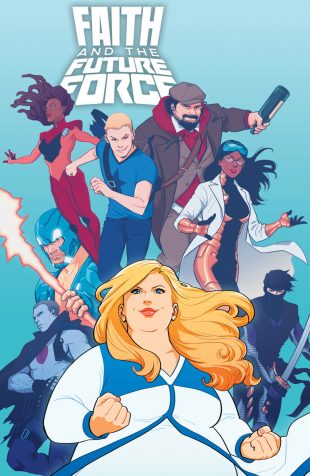 As revealed at AiPT, Valiant is proud to present your first look inside FAITH AND THE FUTURE FORCE #3 – the penultimate chapter to the astonishing standalone event of the summer! On September 27th, join Eisner Award-nominated writer Jody Houser (FAITH, Mother Panic) and explosive artist Diego Bernard (NINJAK, X-O MANOWAR) as they take Los Angeles’ high-flying hero – Faith “Zephyr” Herbert – and place her in the heart of a centuries-spanning battle for the fate of time itself! But some challenges are just too big for one hero…and from Bloodshot to X-O Manowar to Rai to the Eternal Warrior and a formidable phalanx of comrades assembled from across the centuries, Faith must meet her destiny head on to lead the greatest heroes of Valiant’s present and future to rescue humanity from complete annihilation!

This September, discover why FAITH AND THE FUTURE FORCE is the fun-fueled standalone event of the summer – and the century!

On September 27th, jump back to the future with Jody Houser and Diego Bernard as they battle the summer’s most epic standalone event to the ends of eternity…again and again and again! Time comes to a stop for the biggest team of heroes ever assembled, only in FAITH AND THE FUTURE FORCE #3 – featuring covers by Audrey Mok (Archie), Mike Norton (Revival), Doug Paskiewicz (Arsenic Lullaby), and Afua Richardson (Black Panther: World of Wakanda)!

But first: Faith Herbert’s time-busting epic flies onward in FAITH AND THE FUTURE FORCE #2 –the next century-shattering chapter of the summer’s SPECTACULAR STANDALONE EVENT from Eisner Award-nominated writer Jody Houser and comics legend Barry Kitson (HARBINGER, Fantastic Four)! On August 30th, Faith must stop a horrifying threat from erasing all that is and ever will be by recruiting her most trusted allies — the Harbinger Renegades— for a decades-spanning battle to rescue reality! The timestream gets turbulent, only in FAITH AND THE FUTURE FORCE #2 – featuring covers by Jelena Kevic Djurdjevic (FAITH), Monika Palosz (BLOODSHOT SALVATION), Paulina Ganucheau (Another Castle), and David Lafuente (Ultimate Spider-Man)!