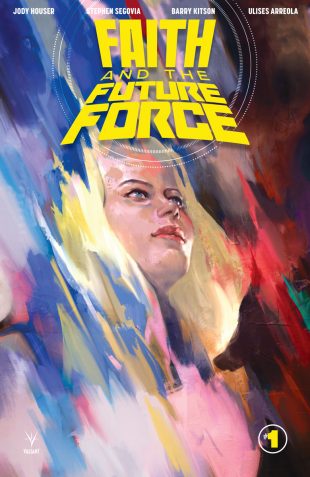 Valiant is proud to announce that three of the publisher’s most riveting summer releases – FAITH AND THE FUTURE FORCE #1 (of 4), SECRET WEAPONS #2 (of 4), and RAPTURE #3 (of 4) – have sold out at the distributor level and will return to comic shops everywhere with all-new second printings on August 30th! Jump into the acclaimed adventures of the largest independent superhero universe in comics here as three of the action-packed releases from Valiant’s ICONS initiative return for a much-demanded encore!

First: fly to the farthest-flung edge of existence for the FIRST ISSUE of Valiant’s SPECTACULAR STANDALONE EVENT with the FAITH AND THE FUTURE FORCE #1 SECOND PRINTING! Join Eisner Award-nominated writer Jody Houser (FAITH, Mother Panic), blockbuster artist Stephen Segovia (WAR MOTHER) and comics legend Barry Kitson (Fantastic Four) here for a centuries-smashing adventure as Faith “Zephyr” Herbert, the high-flying hero of Los Angeles, meets destiny head on… and leads the Valiant Universe’s greatest heroes from across the ages into battle against a calculating A.I. bent on annihilating history one year at a time!

Find out why fans and critics agree that FAITH AND THE FUTURE FORCE #1 is a high-flying summer epic that can’t be missed!

Then: Livewire charges to the forefront of the Valiant Universe for the SECRET WEAPONS #2 SECOND PRINTING! Academy Award-nominated writer Eric Heisserer (Arrival) and Harvey Award-nominated artist Raul Allen (WRATH OF THE ETERNAL WARRIOR) continue the year’s most captivating new series debut as Valiant’s technopathic heroine sets out to recruit a new team of Harbinger Foundation castaways and teach them the purpose behind their power…before the robotic killer known as Rex-O can find them first!

The secret is out…and now, fans and critics everywhere are praising Eric Heisserer and Raul Allen’s SECRET WEAPONS as a master-class in comics storytelling!

“✮✮✮✮✮… Downright genius… This is high-quality comics, with art and story coming together beautifully.” – AiPT!

“✮✮✮✮✮… A beautiful, touching and thought-provoking work of art.” – Comics: The Gathering

“✮✮✮✮½… A beautifully constructed comic in every way possible… Another home run for Valiant.” – Graphic Policy

“✮✮✮✮… A blast… An engaging and personal story.” – SciFi Pulse

Discover why RAPTURE is the runaway hit that is enchanting readers everywhere!

“Wonderful… Kindt is truly a master of his craft.” – Graphic Policy

“Phenomenal… Great writing and a fantastic art…” – Comics: The Gathering

On August 30th, don’t miss your chance to experience Valiant’s fan-favorite and critically adored titles as they charge back to shelves everywhere with the FAITH AND THE FUTURE FORCE #1 SECOND PRINTING, SECRET WEAPONS #2 SECOND PRINTING, and RAPTURE #3 SECOND PRINTING!