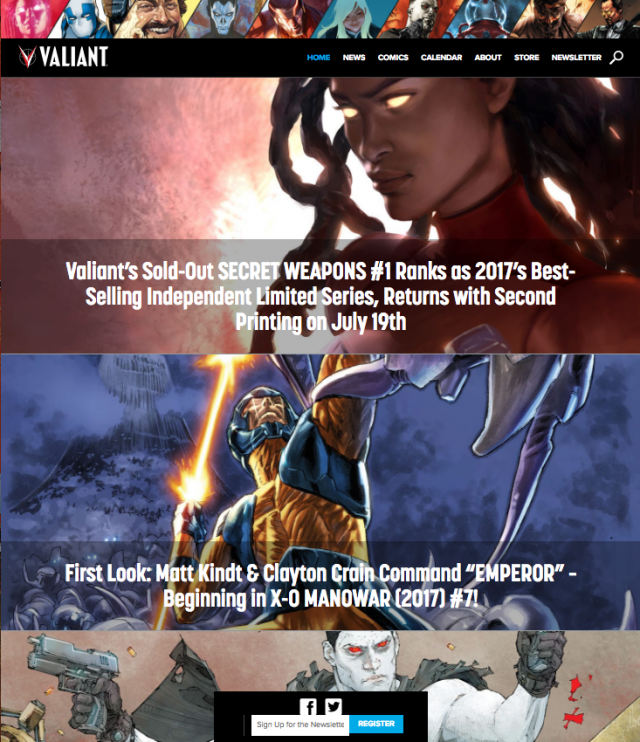 Get Started on the Most Acclaimed Publisher in Comics with Official Reading Chronologies and 12 Free Jumping-On Points – Available Now!

From your desktop, tablet, or mobile device, explore the best the Valiant Universe has to offer in stunning detail!

Never miss the latest breaking news and announcements behind your favorites titles with a constantly updated breakdown of what’s coming next for Valiant’s most formidable heroes!

Throughout 2017 and beyond, Valiant is traveling the world to bring the most renowned universe of heroes in comics to a town near you! Now, keep up with all of Valiant’s upcoming releases and convention appearances…and, if that’s not enough, follow them backward as well with a complete record of all of Valiant’s modern release and tour dates!

Navigate each and every title behind Valiant’s record-shattering resurgence with a complete breakdown of every comic book, trade paperback, deluxe edition hardcover, and omnibus from 2012 onward! Each entry features a distinct synopsis, complete cover gallery, interior page preview, and a link to find your local comic shop!

Not sure where to jump into the adventures of your favorite heroes? For the first time online, fans can now browse a selection of official Valiant reading orders and suggested starting points for each of its biggest series!

Sign up for Valiant’s official newsletter, The Valiant Voice, at http://valiantentertainment.com/newsletter/ and – from the newest comics and upcoming conventions to breaking news and beyond – never miss the latest and greatest happenings for the Valiant Universe! Delivered every Wednesday!

For a limited time, Valiant is releasing 12 of its most acclaimed and fan-favorite debut issues and jumping-on points online exclusively at ValiantEntertainment.com! Now is the time to find out why Valiant is the most talked-about publisher in comics today with these staggering introductions from the industry’s top talents:

THE VALIANT #1
Written by Jeff Lemire and Matt Kindt; Art by Paolo Rivera
Continued in THE VALIANT TPB