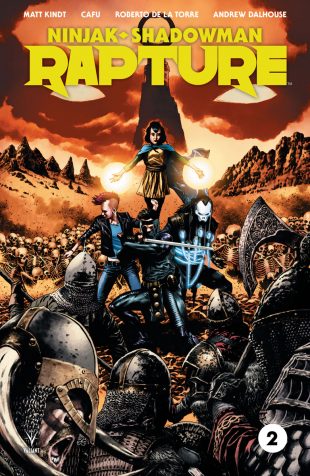 Valiant is proud to announce that RAPTURE #2 – the next spectacular chapter to the summer’s astounding standalone event from New York Times best-selling writer Matt Kindt (X-O MANOWAR, Mind MGMT) and explosive artist CAFU (RAI) – has sold out at the distributor level and will return to store shelves everywhere with the RAPTURE #2 SECOND PRINTING on August 16th! As an ancient evil rises to storm the heavens, the unstoppable assassin codenamed Ninjak and the fallen supernatural guardian known as Shadowman must combine might and magic to save humanity from a catastrophe of biblical proportions!

As Valiant’s fantastic superhero epic journeys toward an earth-shaking conclusion, see why critics everywhere are hailing it as the must-read event of the summer!

On August 16th, Shadowman’s long road back to the front lines of the Valiant Universe starts here as Matt Kindt and CAFU lead Valiant’s first fantasy-fueled summer event in the RAPTURE #2 SECOND PRINTING!

PLUS: In stores tomorrow, Ninjak and Shadowman’s supernatural quest reaches a cataclysmic climax in RAPTURE #3 (of 4) – the latest chapter to Valiant’s paranormal blockbuster event! Deep within the heart of the Deadside, the supernatural evil known as Babel is primed to infiltrate the heavens…and the only piece left in achieving his mad dream is Shadowman!