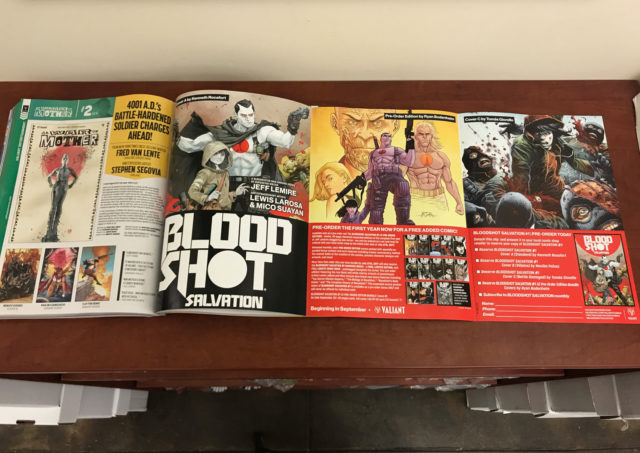 Before BLOODSHOT SALVATION arrives in stores on September 20th, experience the brutal and bloody new beginning that awaits Valiant’s most relentless hero in the July 2017 PREVIEWS catalog (#346) – featuring a stunning, six-page, 24″ x 11.5” gatefold insert, bound directly into Valiant Entertainment’s catalog listings! On the heels of Valiant’s first gatefold insert spotlighting X-O MANOWAR (2017) #1 last winter, find out everything you need to know about the FIRST ISSUE of THE BLOCKBUSTER NEW ONGOING SERIES from New York Times best-selling writer Jeff Lemire (THE VALIANT, Moon Knight) and explosive artists Lewis LaRosa (BLOODSHOT REBORN) and Mico Suayan (BLOODSHOT REBORN) right here with an all-in-one look ahead at Valiant’s most important series of the fall – including a pre-order coupon to reserve your copy with your local comic book retailer!

Packed with blistering artwork and a complete guide to can’t-miss offerings like the BLOODSHOT SALVATION #1-12 PRE-ORDER EDITION BUNDLE and the BLOODSHOT SALVATION #1 BRUSHED METAL VARIANT COVER – printed via a special process on real-life brushed aluminum – get the jump on the seminal series of 2017 as Bloodshot’s revenge-fueled mission starts here with this one-of-a-kind countdown to Valiant’s latest ongoing series – printed on a massive, six-panel gatefold and only available in PREVIEWS catalog #346!