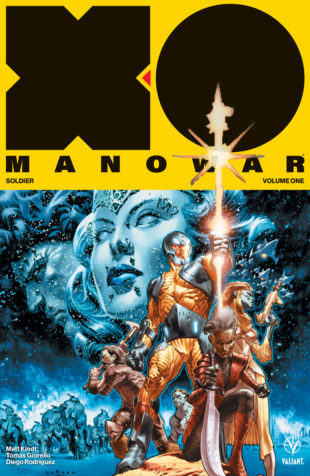 Each Volume of Matt Kindt’s Blockbuster Epic to Debut at $9.99 Alongside New Arc

Now, for the first time, Valiant can reveal that, as part of a new and unprecedented trade paperback release program designed specifically for X-O MANOWAR, each one of the series’ subsequent volumes in 2017 – including X-O MANOWAR (2017) VOL. 2: GENERAL with artist Doug Braithwaite (ARMOR HUNTERS) in SEPTEMBER and X-O MANOWAR (2017) VOL. 3: EMPEROR with artist Clayton Crain (4001 A.D.) in DECEMBER – will also be offered for just $9.99 and will always arrive in stores alongside a new arc or jumping-on point.

Packed with more than 30 pages of rarely seen art, character designs, creator commentary, and bonus features in each volume, X-O MANOWAR’s first must-read trade paperback collection kicks off the best-selling superhero sci-fi hit of 2017 with the complete collection of “SOLDIER” – the punishing, sold-out introduction pushing Aric of Dacia beyond the farthest limits of our galaxy…and into the brutal opening salvo of the ultimate X-O Manowar tale ever told!

Plus: In addition to the series’ universally acclaimed and thrice sold-out introduction, the galaxy-spanning story that has driven Valiant’s most enduring icon back to war gets even bigger with a special prelude once only available in Valiant’s 2017 Free Comic Book Day release, written by Matt Kindt with explosive artwork by CAFU (RAPTURE)!

It all starts this Wednesday, June 28th, as the X-O MANOWAR (2017) VOL. 1: SOLDIER TPB marches into comic shops alongside X-O MANOWAR (2017) #4 – the FIRST ISSUE of “GENERAL,” an ALL-NEW ARC and EXPLOSIVE NEW JUMPING-ON POINT from Matt Kindt and superstar artist Doug Braithwaite (BLOODSHOT U.S.A., Justice) launching the next phase of X-O Manowar’s galaxy-razing rise to power!

As the first cosmos-crushing volume of X-O MANOWAR (2017) blasts onto shelves, see why fans and critics everywhere are hailing Valiant’s star-studded tale of war and brutality on the universes’ farthest fringe as one of the most satisfying series of the year:

“One of the most promising comics on the market.” – Entertainment Weekly

“[X-O MANOWAR] is high-concept surreal warfare at its finest, with visuals that drop your jaw and swell your chest.” – Vulture

“[X-O MANOWAR] will redefine what the character means to Valiant as a publisher and comics as an industry.” – Paste Magazine

On June 28th, join master storytellers Matt Kindt and Tomas Giorello right here for a stunning new beginning for Valiant’s most enduring hero, complete with over 30 pages of bonus content, only in X-O MANOWAR (2017) VOL. 1: SOLDIER TPB – arriving in stores the same day as X-O MANOWAR (2017) #4!