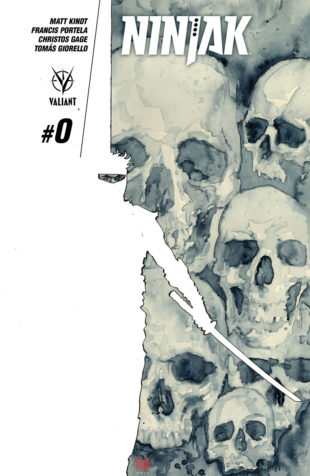 Plus: The Road to NINJA-K #1 Begins with an Essential Prelude by Christos Gage & Tomas Giorello

As revealed today at Nerdist, Valiant is proud to announce NINJAK #0 – an all-new jumping-on point for the Valiant Universe’s most dangerous intelligence operative, and a massive 40-page milestone, arriving in comic shops everywhere this September!

FIRST: New York Times best-selling writer Matt Kindt (X-O MANOWAR, Mind MGMT) brings his masterful, record-setting run to a close as he puts Ninjak’s past and present in the crosshairs with a shocking and revelatory tale – as illustrated by fan-favorite artist Francis Portela (FAITH) and an all-star cast of comics luminaries, each detailing a different moment in Colin King’s bloodstained path from boyhood to international infamy…

THEN: Before Ninjak launches into a riveting new ongoing series this November in the pages of NINJA-K #1, the torch is passed to acclaimed writer Christos Gage (Netflix’s Daredevil) and blockbuster artist Tomas Giorello (X-O MANOWAR) as they prepare a startling introduction to Colin King’s next mission with a shocking prelude to the winter’s most anticipated new series!

This September, discover how the man behind the sword fortified his mind, body and soul as Francis Portela and an all-star arsenal of special guests celebrate the final chapter in Matt Kindt’s adrenaline-addled run on NINJAK…and then, get ready for a startling introduction to Colin King’s next mission as Christos Gage and Tomas Giorello present an essential prelude to November’s NINJA-K #1! The past, present, and future bleed together here with an unstoppable 40-page jumping-on point, only in NINJAK #0 – featuring a blockbuster lineup of covers from David Mack (Daredevil), Clayton Henry (HARBINGER WARS), rising star Yama Orce, Peter Bagge (Hate), and Javier Pulido (She-Hulk)!

Plus: Ninjak strikes again this November with a deadly new beginning in NINJA-K #1 – A NEW CAN’T-MISS ONGOING SERIES! Coming this fall from acclaimed writer Christos Gage and superstar artist Tomas Giorello, the United Kingdom’s most dreaded intelligence operative delves into the cold, calculating world of espionage and international intrigue!

Out of the aftermath of Matt Kindt’s NINJAK, Colin King’s next mission begins in NINJA-K #1 – coming this November from razor-sharp creators Christos Gage and Tomas Giorello!