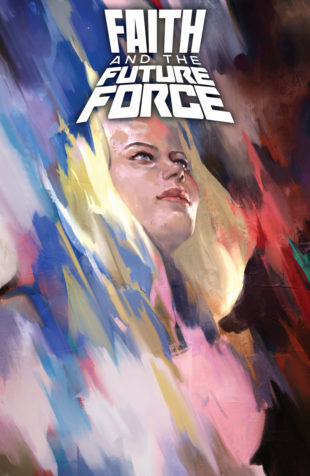 This summer, every second counts…and Valiant’s stratospheric hero is assuming her rightful role at the forefront of Valiant’s greatest champions for a millennia-smashing conflagration at the end of existence itself!

As revealed at The A.V. Club, Valiant is proud to present the first lettered look inside FAITH AND THE FUTURE FORCE #1 – the FIRST ISSUE of A SPECTACULAR SUMMER EVENT launching Faith out of her Eisner-nominated solo adventures and into the highest-stakes team-up history has ever known alongside Rai, X-O Manowar, the Harbinger Renegades, Timewalker, and a near-infinite army of the Valiant Universe’s greatest heroes of the present and future! On July 26th, the time stream gets turbulent as Eisner Award-nominated writer Jody Houser (FAITH, Mother Panic), explosive artist Stephen Segovia (WAR MOTHER, Action Comics) and comics legend Barry Kitson (HARBINGER, Fantastic Four) join forces to send Faith and Neela Sethi, Timewalker on a centuries-spanning rescue mission to save history from all-out eradication at the hands of a megalomaniacal intelligence too powerful for a single hero!

“[FAITH AND THE FUTURE FORCE] was more about having a villain different in style and scope than we’ve seen in [Valiant] before, while still feeling like a villain that fits into Faith’s world specifically,” series writer Jody Houser told Comic Book Resources. “He’s weirdly cute for an entity that wants to kill everything and everyone. Hopefully Faith and the others don’t underestimate how dangerous he is…”

On July 26th, an enemy unleashes entropy at the far end of time…and Faith leads the die-hard team of Rai, X-O Manowar, the Harbinger Renegades and special surprise guests recruited from the ancient world to 4001 A.D. to save the modern day from a malevolent force bent on eradicating existence one century at a time! The clock is ticking, so don’t miss a moment as Valiant’s high-stakes summer event presents a timeless jumping-on point that will forever be etched in history, only in FAITH AND THE FUTURE FORCE #1 – featuring covers by Jelena Kevic-Djurdjevic (DIVINITY), Kano (Daredevil), Marguerite Sauvage (FAITH), and Felipe Massafera (Shaper)!