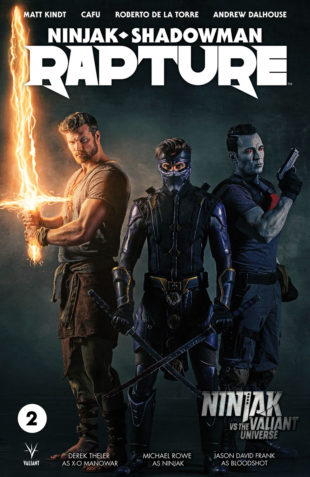 As revealed at ComicBook.com, Valiant is proud to reveal its second wave of NINJAK VS. THE VALIANT UNIVERSE variant covers – the next in an all-new line of steel-shattering shelf covers spotlighting the battle-hardened heroes of the upcoming VALIANT DIGITAL webseries! Arriving on shelves in comic shops everywhere throughout the summer, get your first look at the hotly anticipated live-action debut of Valiant’s most iconic and renowned heroes – including Ninjak, Bloodshot, Eternal Warrior, Livewire, Archer & Armstrong, and more – as realized by the series’ star-studded cast.

All summer long, get ready for a steel-shattering battle royale between the world’s most feared super-spy and a deadly gauntlet of the world’s most formidable warriors with the NINJAK VS. THE VALIANT UNIVERSE line of variant covers – returning to comic shops this summer on the following releases from Valiant Entertainment:

Each NINJAK VS. THE VALIANT UNIVERSE variant cover is available as a standard “order all” shelf cover and will be available for retailers to order in unlimited quantities at the standard suggested retail price.

This year, Ninjak goes to war with his former allies – Bloodshot, X-O Manowar, Livewire, Archer & Armstrong, and more – for a razor-tipped whirlwind of grueling combat and relentless punishment! As VALIANT DIGITAL‘s much-anticipated webseries prepares to launch the best of Valiant’s most battle-hardened icons into live action, prepare yourself for the epic battles that await with the next round of NINJAK VS. THE VALIANT UNIVERSE variant covers — coming soon to a comic shop near you!