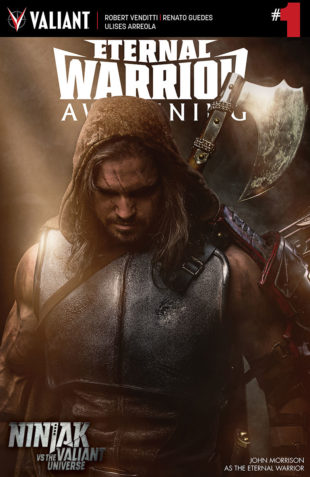 As revealed at Gamespot, Valiant is proud to unveil the first look at the upcoming NINJAK VS. THE VALIANT UNIVERSE series of variant covers – an all-new line of steel-shattering shelf covers spotlighting the battle-hardened heroes of the upcoming VALIANT DIGITAL webseries! Arriving on shelves in comic shops everywhere from May through August, get your first look at the hotly anticipated live-action debut of Valiant’s most iconic and renowned heroes – including Ninjak, Bloodshot, Eternal Warrior, Livewire, Armstrong, and more – as realized by the series’ star-studded cast.

Now, before the world’s deadliest intelligence operative collides with an awe-inspiring cast of heroes from across Valiant’s groundbreaking, award-winning superhero universe in 2017, take home a piece of the action with the NINJAK VS. THE VALIANT UNIVERSE line of variant covers – hitting stores all summer long on the following Valiant Entertainment releases:

In 2017, Ninjak begins a steel-shattering trial by fire through the heart of the Valiant Universe itself! Now, prepare for the high-powered firefight that is come as Ninjak, Bloodshot, the Eternal Warrior, Livewire and more of comics’ most indelible heroes usher in VALIANT DIGITAL’s upcoming, live-action showdown with the NINJAK VS. THE VALIANT UNIVERSE line of variant covers – available in comics shops everywhere all summer long!