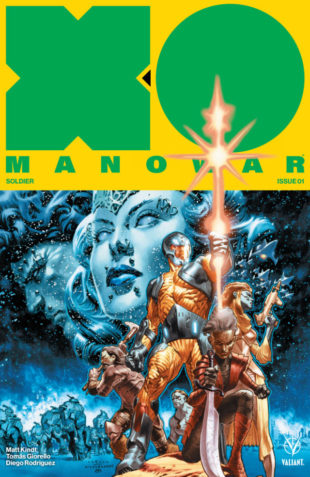 With 90,000 copies sold and counting, the year’s top-selling comic from an independent publisher is returning to the front lines with another sold-out printing!

Valiant is proud to announce that X-O MANOWAR (2017) #1 – the FIRST ISSUE of the EPIC NEW ONGOING SERIES from New York Times best-selling writer Matt Kindt(DIVINITY, Mind MGMT) and blockbuster artist Tomas Giorello (BLOODSHOT REBORN), and one of the year’s most acclaimed new series debuts – has sold out at the distributor level for the second time and will return to store shelves everywhere with the X-O MANOWAR (2017) #1 THIRD PRINTING on May 24th alongside X-O MANOWAR (2017) #3!

A stunning new beginning for Valiant’s most enduring icon returns to comic shops everywhere on May 24th with part one of “SOLDIER” – a punishing, three-issue introduction that will push Aric of Dacia beyond the farthest limits of our galaxy…and into the brutal opening salvo of the ultimate X-O Manowar tale ever told!

Don’t miss your chance to see why fans and critics everywhere have crowned Matt Kindt and Tomas Giorello’s X-O MANOWAR (2017) #1 as a must-read spectacle of high-octane adventure and one of the year’s most essential new series:

On May 24th, jump on board a modern masterpiece-in-the-making as Matt Kindt and Tomas Giorello bring X-O Manowar rocketing onto a battlefield beyond Earth…and even farther beyond imagination! Presented in the brand-new VALIANT PREMIUM format – complete with a deluxe matte finish card stock cover, heavyweight interior pages, and minimal advertisements for an uninterrupted storytelling experience, Aric of Dacia’s one-man domination of a planet returns to comic shops everywhere, only in the X-O MANOWAR #1 THIRD PRINTING – on shelves alongside X-O MANOWAR (2017) #3!