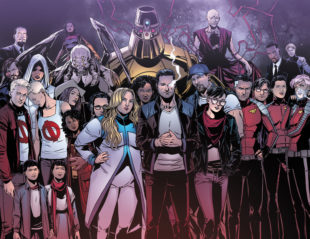 Even killing machines need a day off!

For the first time in over 30 years, two nanite-enhanced soldiers once controlled by Project Rising Spirit – codenames: “Tank Man” and “Viet Man” – have finally earned their freedom and some government-sanctioned downtime, courtesy of Uncle Sam. After enduring a lifetime of war, blood, and fore, all these two semi-retired commandos want is a little vacation. But how long can this pair of highly trained tourists unwind and enjoy the sights of New York City… before they find trouble in the city that never sleeps?

Leave the selfie stick at home as rising star Eliot Rahal (DIVINITY III: ESCAPE FROM GULAG 396, The Doorman) and Harvey Award-nominated artist Khari Evans (HARBINGER, Harley Quinn) give these old soldiers the danger-filled day off they deserve…and celebrate Bloodshot’s silver anniversary with an action-packed tribute to the original BLOODSHOT #12!

Master Darque – the sadistic lord of death and resurrection – yearns to be free once again, but first he must fight for his life. Darque is a target, his powers are weak, and his enemies know it. Now, Darque’s own former pupil and Ninjak’s ruthless arch-nemesis – the lethal assassin known as Roku – has gathered the Shadow Seven together again for the sole purpose of putting Darque down for good. And the only thing holding their uneasy alliance together is a mysterious benefactor from the shadows… someone who also goes by the name Darque…Everything has led to this… Out of the ashes of BOOK OF DEATH, Ninjak and Master Darque will collide in a punishing circle of death, destruction and hellfire!

Generation Zero managed to survive their first mission, and now duty has called on them to venture deep inside a perilous dimension only known as the Heroscape to see the world through a new set of eyes! They’ll discover their friends’ biggest secrets, their enemies’ darkest fears, and their town’s sinister connection to this imagination-fueled reality. But just because the Heroscape is imaginary, doesn’t mean it can’t kill you… And, from anime-inflected zombie hordes to psychedelic sci-fi warriors, all of Rook, Michigan’s most deeply buried fantasies are about to come roaring out of your daydreams!

Dream big because New York Times best-selling writer Fred Van Lente (IVAR, TIMEWALKER) and acclaimed artists Diego Bernard (X-O MANOWAR) and Javier Pulido (Daredevil) and are gearing up to send Valiant’s temperamental teenage time-bombs blasting out of the suburbs and into their most grisly adventure yet!

For centuries, the sacred X-O Manowar has stood unrivaled as the universe’s most powerful weapon. Today, will it equal Earth’s doom? An unthinkable alien race known only as The Torment has come to our world in search of the armor’s secrets. Now, they stand opposed by Aric of Dacia – former slave, noble warrior, resolute king, and current master of the armor’s near-limitless capabilities. But are one man…and one weapon… enough to repel a force capable of leveling a thousand civilizations? A whole new era for X-O Manowar begins here…and you won’t believe what’s coming next!