Out of the jungle, into the fight…

When all hope seems lost, the final threads tethering the Sauvage family to their humanity will finally be severed. Just as the beasts within begin to take hold, the final revelation about the prehistoric island that has claimed them will finally stand revealed. But will this twist of fate offer a last chance at rescue…or forever seal their doom?

The past and present collide as Valiant’s next great hero rises in a baptism of bloodshed! Be there as acclaimed writer B. Clay Moore (Hawaiian Dick) and explosive artists Clayton Henry (Harbinger Wars) and Lewis LaRosa (Bloodshot Reborn) bring their primal origin story to a close! 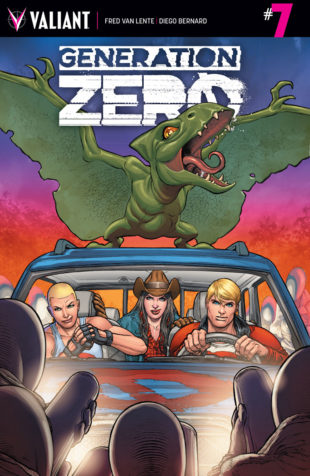 Tap into the uncharted plane of reality called the Heroscape and you can see the world through anyone else’s eyes – and find out how their reality is governed by their own inspirations! Now, as a mysterious force preys upon Rook’s citizens, Animalia must enter the Heroscape…and experience a world filtered through her own twisted imagination! But as Generation Zero’s most militant adolescent wunderkind enters a world populated by colorful monstrosities of her own design, Animalia must lock horns — literally — with demons both outward and within!